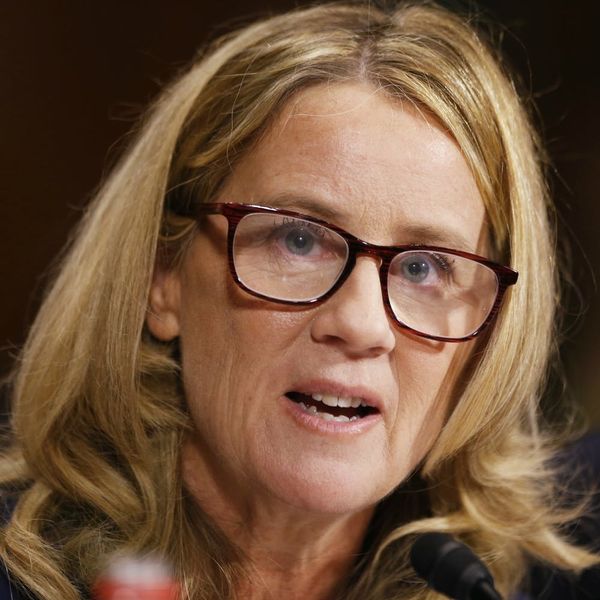 All eyes were on Washington Thursday as Supreme Court nominee Brett Kavanaugh’s first accuser, Dr. Christine Blasey Ford, testified to the Senate Judiciary Committee about the assault she alleges took place at a party in 1982 when she was just 15 years old.

Ford came forward (at first anonymously) several weeks ago with her allegation that Kavanaugh sexually assaulted her in front of a friend, now known to be Mark Judge, while both teens were intoxicated. Kavanaugh denies the allegations in their entirety.

Sitting down around 10am local time, Ford began testimony that was at turns both brave and heart wrenching. These are six of the most striking moments from her testimony.

She admitted she was terrified of testifying.

In her opening statements, and before recounting what allegedly happened to her to the committee, Ford shared how scared she was about coming forward with her allegations. “I am here today not because I want to be,” she said, choking back tears. “I’m terrified. I’m here because I believe it is my civic duty to tell you what happened to me while Brett Kavanaugh and I were in high school.”

One moment stands out to her and has followed her throughout her entire life.

When questioned by Senator Patrick Leahy (D-VT) about what stood out most to her about the alleged incident, Ford, a psychology professor, explained, “Indelible in the hippocampus is the laughter. The uproarious laughter between the two and their having fun at my expense.” She continued: “They were laughing with each other. I was underneath one of them while the two laughed. Two friends having a really good time with one another.”

She feels certain in her accusation.

When Senator Dianne Feinstein asked if she could be mistaken, Ford said no.

“How are you so sure that it was he?” Feinstein asked.

“The same way that I’m talking to you right now,” Ford replied. “Just basic memory functions. Also just the level epinephrine and norepinephrine in the brain that codes memories into the hippocampus and so the trauma-related experience is locked there, whereas other details kind of drift.” When pressed by Feinstein on whether it could be a case of mistaken identity, Ford simply replied, “No, it is not.”

After the attack, Ford suffered for years from PTSD-like symptoms.

Ford explained that in the four years immediately after the alleged attack, and continuing throughout her adult life, she suffered many negative mental health outcomes, including “anxiety, phobia, and PTSD symptoms,” but that the first years were the hardest, because the immediate trauma made it difficult for her to complete schoolwork and make friends.

She clarified press reports about her attack in great detail.

The media has reported that Ford and Kavanaugh were at a house party while the alleged attack took place, but Ford wanted to clarify that the teens at the house were, in fact, preparing to go to another party. “I recall that it was a sparsely furnished, fairly modest living room. I assumed it was going to lead to a party later on. It was kind of a ‘pre-gathering,'” she explained. Ford also alleged that while she was sober, Kavanaugh and Judge were “extremely intoxicated.”

During her opening testimony, Ford admitted that she considered not coming forward for fear of what would happen to her and her family. Though messages of support have outnumbered threats, she said that some of her fears were founded.

“My family and I have been the target of constant harassment and death threats,” she explained. “I have been called the most vile and hateful names imaginable. These messages, while far fewer than the expressions of support, have been terrifying to receive and have rocked me to my core.”