The Art of the Mixtape… in Coffee Table Form 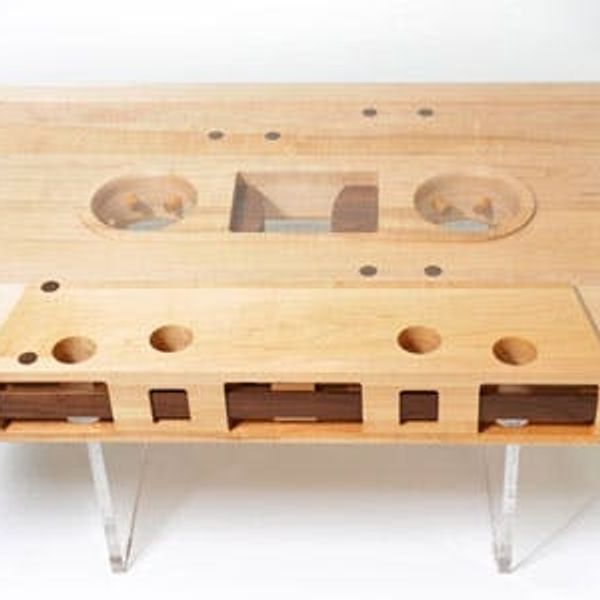 Do you still have a massive collection of mixtapes? You know you probably won't have a way of listening to them in a few years, but you still hang on just in case. If you're like us, you had a blank tape permanently in your tape deck, ready to record your favorite songs from the radio at any given moment. Maybe you've even taken the tape to convert your awesome 90s mixtapes into Spotify playlists, but there's still something about the tape that makes you feel nostalgic.

Well, cassette tapes may be a thing of the past but as children of the 80s and 90s take over the world, one thing is certain: the mixtape is iconic. Even just the shape of a tape conjures up all sorts of fun memories, middle school crushes, and sleepovers spent perfecting your routine to The Sign by Ace of Base. And now, this form has inspired one woodworking artist to create a coffee table ode to the mixtape.

Jeff Skierka's Mixtape Table is a 12:1 scaled replica of a cassette tape. It's made using reclaimed maple, walnut and lucite with a plexiglas top. The photos you see here are of a one-of-a-kind prototype table.

And yes, the table is totally reversible. Switch to the B-side when you're feeling angsty and alternative. ;)

Future versions of the table will likely be made using high grade plywood and a variety of ply combinations with a glass top. Jeff and his team are working on getting this into production soon – feel free to email Jeff directly to be the first to know when you can buy a Mixtape Table of your own!

This isn't the first time 80s and 90s pop culture has materialized in the form of a coffee table. Remember the incredible Nintendo Controller table that actually works? The only thing that would take the Mixtape Table to the next level would be if it included a working tape deck and speaker system. We can always dream…!

Anjelika Temple
As Co-Founder and Chief Creative Officer of Brit + Co, Anjelika Temple brings her voracious consumption of all things creative and colorful to DIY projects, geeky gadgetry finds and more. When she's not DIY-ing her heart out, you'll find her throwing dinner parties with friends or adventuring with her husband David, their daughters Anokhi and Indira, and their silly dog Turkey.
Home