20 Couples Costumes for Kids of the ’90s 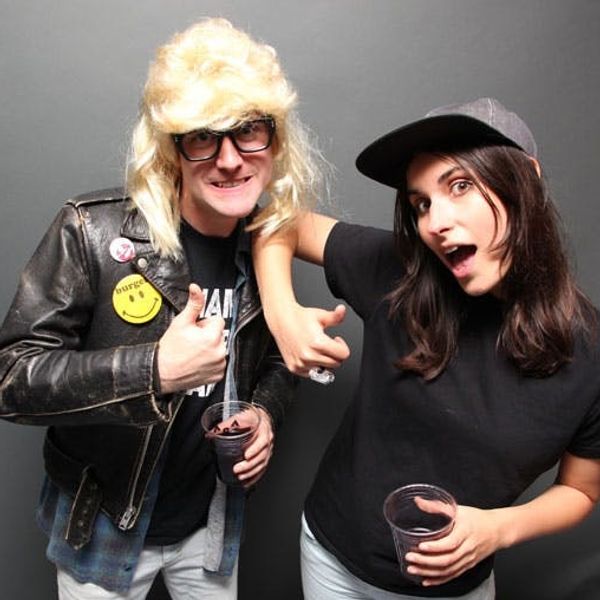 Oh, the ’90s. A decade filled with power couples like J. Lo and Puff Daddy, Brad and Gwyneth and… Wayne and Garth. For this batch of Halloween inspiration, we’re turning to angst and flannel, with a little bit of glitter mixed in for good measure. To go for a complete list of ’90s inspiration, we have to admit that we turned to a few moments from the late ’80s as well as the very, very early aughts. You wouldn’t love us unless we took a creative approach, right? ;)

We had to serve up the side by side for this one — that strapless dress with giant white bow and white gloves is just too good. In true 90210 fashion, this is definitely one of the more angsty, volatile couples of the ’90s. We debated on whether or not to include a Dylan and Kelly option on this list ;) (via I Am Not a Stalker)

Can you say…. schwiiiing? Leave it to Brit + Co editor Kate Puhala to make dressing up as Wayne Campbell actually look chic. The underbite-based smile that Garth is sporting really seals the deal. (via Brit + Co)

What did we tell you about reaching a little further back in time beyond the ’90s? The truth is, as kids of the ’90s Pacman was actually a pretty sizable part of the decade for some of us. (via Julie Ann Art)

Although Doritos technically came into existence in 1964, they went through a serious makeover in 1994 when Frito-Lay spent $50 million to redesign Doritos to make the chips 20 percent larger, 15 percent thinner and with rounded edges. Like many of us, the ’90s represented a renaissance and new beginning for Doritos, and WAY MORE FLAVOR! (via Smilebooth)

The shoe salesman and the crimson-haired bombshell were the ’90s answer to Lucy and Ricky, and we loved their love-hate relationship. (via On The Blog Bandwagon)

When it comes to the perfect high school couple, kids of the ’90s can always turn to Zack and Kelly. Even when that weird adult played by Patrick Muldoon came onto the scene, Zack was there to make things right with Kell. This costume is all about the giant cell phone and chipper cheerleader attitude — and how much the Zach on the right looks like the OG. (via Coolest Homemade Costumes + For the Love of Prep)

Whoa. When is the last time you thought about the movie The Mask? Like… not since 1994, right? (via Buzzfeed)

Journey with us back to 1988, when a world accepted the idea that Arnold Schwarzenegger and Danny DeVito could be… twins? Wait, WHAT? Khakis, penny loafers (or moccasins) and matching blazers make this look, but it’s those ’80s patterned short sleeve button downs on the inside that take it to the next level. Of course, I might be biased… I happen to be playing the role of Danny DeVito in this costume ;) (via Brit + Co)

Okay okay, you are totally about to call us out for dipping too far into the ’80s here, but the Princess Bride was actually a crucial part of my ’90s upbringing. And if you were born in the ’80s or early ’90s, I know you agree. (via Brit + Co)

If you average the ’80s items with this early ’00s number, you end up with the ’90s. And how could we not include Justin and Britney, especially when portrayed by Sean Parker and his wife. (via Daily Mail)

11. Beetlejuice Couple: Technically this came out in 1988, but you get that we’re being flexible with the decade at this point. Eyeballs and serious DIY mask-making skills are required for this monster version of the couple stuck in the attic in one of our favorite spooky flicks.

These two = YES. And is it weird that we would rock that polka dot sweater on the reg? (via SheKnows and Pinterest)

We’ve got another Brit + Co couple for this one, and this time it’s culinary rockstar Sarah Jones channeling her inner Gary Sinise. #runforrestrun (via Brit + Co)

X-files fanatic? Or just want to rock a ginger wig for the night? Then this pairing has you and your boo written all over it. (via Perhapablog)

We’ve featured this costume of Kate and her bf before and we’ll feature it time and time again. These two star-crossed lovers represented teenage angst, dyed hair and flannel flawlessly. (via Brit + Co)

16. Axl and Slash: Confession: The author of this article is now also playing Slash. Welcome to the jungle, baby!

Whether the dog represents Frances Bean is still TBD, but this is one of our all-time favorite costumes. And guess what? It was actually one of the entries to our costume contest way back in 2012! #tbt? :)

Jack and Sally from a Nightmare Before Christmas

This costume will have you in stitches? Sorry, we had to. (via Jesse Draper on Flickr)

OMG. How perfect is this? Especially if you rig your helmets so that they double as beer holders. (via Buzzfeed)

We’ll end with one of our favorite couples costumes ever — Lloyd and Harry from the original Dumb and Dumber. Those suits will make you smile for days. (via Brit + Co)
Anjelika Temple
As Co-Founder and Chief Creative Officer of Brit + Co, Anjelika Temple brings her voracious consumption of all things creative and colorful to DIY projects, geeky gadgetry finds and more. When she's not DIY-ing her heart out, you'll find her throwing dinner parties with friends or adventuring with her husband David, their daughters Anokhi and Indira, and their silly dog Turkey.
90s
Halloween Costumes
90s Celebrity Couples Couples Halloween Costumes Halloween Costumes
More From Halloween Costumes