The Best ’90s Movies to Watch on Netflix 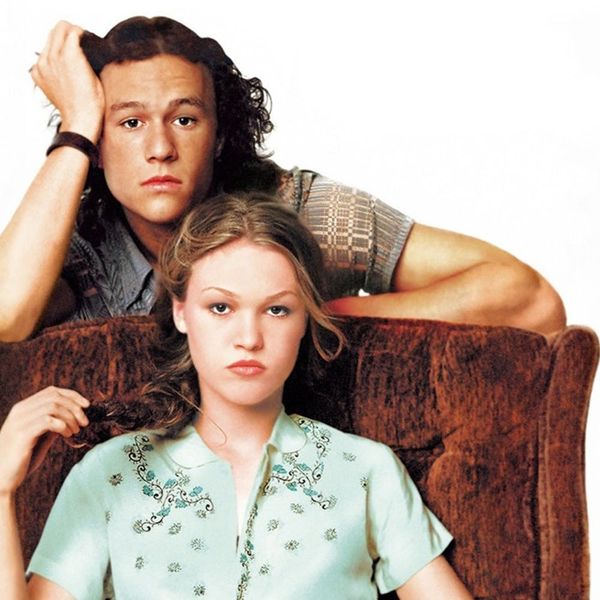 The ‘90s were a magical time for movies, filled with romance, comedy, sci-fi, and some pretty mind-blowing dinosaurs. In fact, quite a few of our all-time favorite films came out of that particular decade, which is why we’re more than happy to suggest these '90s movies that you can stream right now on Netflix.
10 Things I Hate About You (1999): A modern take on Shakespeare's Taming of the Shrew, 10 Things I Hate About You is the film that saw many fans first fall for Heath Ledger. With a stellar cast that also includes Julia Stiles and Joseph Gordon-Levitt, this beloved rom-com is a perfect example of how well the ‘90s did teen movies. (Photo via Touchstone Pictures)
Forrest Gump (1994): This Best Picture Oscar winner starred Tom Hanks in one of his most iconic roles, alongside Princess Bride/House of Cards/Wonder Woman actress Robin Wright. The story of one fictional man who lived an extraordinary life and influenced those around him in ways no one could have predicted, Forrest Gump is a roller coaster of emotions in the best way. (Photo via Paramount Pictures)
Armageddon (1998): When the planet is in danger of being utterly obliterated by an asteroid, who do you call for help? Deep-core drillers, natch! Especially if it’s a team headed by Bruce Willis, whose character's daughter (a memorable Liv Tyler) is in love with a member of his crew (Ben Affleck). (Photo via Buena Vista Pictures Distribution)
Emma (1996): Gwyneth Paltrow may be all about that Goop-ish lifestyle now, but back in 1996, her acting career was still a major priority. (It would be a couple of years before her Oscar-winning gig in Shakespeare in Love.) She earned buzz for taking on the lead role in Jane Austen’s Emma. (photo via Miramax Films)
Cool Runnings (1993): Just because you've never seen snow, doesn’t mean you can’t be Olympic bobsledders. At least, that’s the idea behind the heartwarming film (loosely based on a true story) about four Jamaican bobsledders who aim for (and go to) the 1968 Calgary Winter Olympics. (Photo via Disney)
The Mighty Ducks (1992): It’s hard to imagine anyone not loving this film, which stars Emilio Estevez in his prime along with a young Joshua Jackson. Estevez plays a cocky lawyer who, as part of a community service sentence, has to manage a down-and-out kids' hockey team that just needs a little coaching magic to turn things around. (Photo via Buena Vista Pictures)
The Nightmare Before Christmas (1993): A film that will always stand alone when it comes to delightful frights, this stop-motion animated musical by Tim Burton is a cult classic for folks who enjoy a dark fabled fantasy. (Photo via Buena Vista Pictures)
The Craft (1996): The movie that had nearly every '90s teen girl wanting to be a “natural witch,” The Craft was a nod to those who “are the weirdos” and love a bit of spooky fun. (Photo via Columbia Pictures)
The Sixth Sense (1999): Whether you believe in ghosts or an afterlife, The Sixth Sense is enough to give anyone serious chills. It also spawned one of the most famous and quotable lines ever. Warning: You probably shouldn’t watch this movie alone. (Photo via Buena Vista Pictures)
Scream (1996): Ushering in a new era of teen horror movies, this film — which stars Neve Campbell, Courteney Cox, and Drew Barrymore (in her epically unexpected role) — focused on the genre itself and sparked a franchise of similar slasher flicks. (Photo via Woods Entertainment)
Titanic (1997): Whether you've never seen it (how can that possibly be?!) or you've watched it a million times and can recite every line in your sleep, the doomed story of Jack and Rose is always worth a viewing. But prepare yourself: There’s a good chance you’ll bawl your eyes out as much as you did the first time you watched the film. And just as a side note: THERE WAS ROOM ON THAT DOOR FOR TWO! (Photo via Paramount Pictures)

Desiree O
Desirée O is a ‘Professional Bohemian’ who loves anything and everything related to the arts, entertainment, and pop culture. She ADORES being a ‘Newsy’ for Brit + Co, covering all of the latest tidbits of awesomeness that you want to read about. When she’s not writing, she’s either making messy art, going on long adventurous walks with her camera, or poking around over at bohemianizm (http://www.bohemianizm.com/). You can find out about Desirée O and her work at http://DesireeO.com/ or follow her on Twitter @DesireeO.
Netflix
Movies
Netflix SEO Tracking
More From Movies