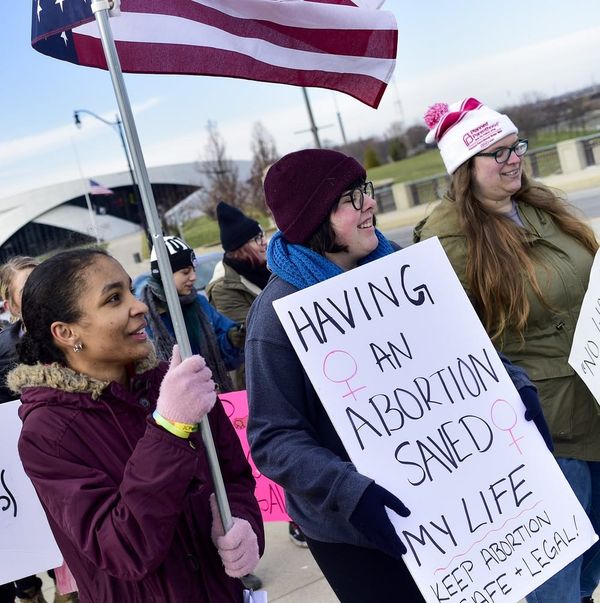 In November, Ohio’s Republican-led House passed a fetal “heartbeat” bill stating that abortions cannot be legally performed after a fetal heartbeat could be detectable by transvaginal ultrasound — in some cases, as early as six weeks. The state’s Senate sailed the legislation through on Wednesday, December 12, with a slight amendment that allows for the procurement of an abortion after a fetal heartbeat is detectable by non-transvaginal ultrasounds, such as abdominal ultrasounds, which would potentially allow women a few extra weeks to legally obtain an abortion in the state.

Beyond its grave implications for women’s reproductive health, the Senate-passed bill adds an even more sinister legality, proposed after the House bill first passed: Anyone who performs an abortion after a fetal heartbeat is detected by ultrasound can be charged with a fifth-degree felony and receive a sentence of up to one year in jail along with a $2,500 fine.

“It’s [the law] tying the hands of medical professionals who want to do what’s best for their patients, and it punishes doctors who perform abortions with prison time,” Democratic State Senator Charleta Tavares told Bustle. “Who wants to even have that hanging over their head?”

Tavares, alongside her colleague Senator Sandra Williams, raised concerns that the bill may deter medical students from studying or even taking jobs in the state, which already faces a physician shortage in 137 geographic areas. While physician shortages may seem like a workable issue, evidence shows that areas across the country without access to safe medical care have higher instances of untreated physical and mental health, lower quality of life, and higher instances of preventable deaths.

In fact, looking at how rural health disparities affect people without access to health care could give a good indication of what could happen to all Ohioans if Tavares and Williams are correct. Without access to reliable medical care, patients may choose not to see a doctor, particularly if they need to travel longer than one or two hours away.

“Access to providers, even family physicians, is a problem,” Gary Hart, PhD, director of the Center for Rural Health, University of North Dakota School of Medicine and Health Sciences, told the Association of American Medical Colleges in 2017. “If you want to go to an OB/GYN, depending on where you live in the country, you may have to go 200 miles.”

The CDC says that with regard to the five most common causes of death in the US, rural areas are disproportionately affected more because of lack of access to “public health programs that support healthier behaviors and neighborhoods and better access to health care services.” The CDC suggests that in order to reduce what they call “potentially excessive deaths,” these communities should have better access to prevention services (like screenings, information, and wellness checks) and more health care providers in general. But that’s easier said than done, and in a state with already dwindling numbers of medical professionals, it could become nearly impossible to rectify.

Although previous attempts at heartbeat bills have been vetoed by Governor John Kasich, only to be replaced by slightly less dangerous abortion bans, Tavares told Bustle that the fixation on women’s bodies, and women’s health, from a mostly male legislature, is deeply troubling.

“There’s this focus on the womb,” she said. “As I listened to those speaking [on the floor Wednesday], disproportionately once again they’re older Caucasian men speaking about a woman’s body and what she can and cannot do with it. As I shared yesterday, the message to women of Ohio is they’re still chattel, and men know what’s best.”

Although Kasich says he will veto this bill if it gets to his desk before his tenure ends at the end of the month, incoming Governor-elect Mike DeWine says he will pass it into law if he gets to the bill upon being sworn into office. A second bill, banning the use of dilation and evacuation (known as a D&E procedure) in the second trimester, regardless of medical necessity, will join the heartbeat bill on Kasich’s desk. Kasich has not announced whether he will veto the second bill.

Kat Armstrong
Kat has been a writer, social media maven and mom for longer than she's willing to admit. She's also spent time in front of and behind the camera, interviewing celebs, politicians and acting as a producer for fashion and artistic photography shoots. When she isn't writing for various orgs and publications, she's hanging with her kids, husband and French Bulldog, Peter, in Toronto, Canada.
Controversy
Womens Health
Controversy Politics Womens Health