The Surprising, Empowering History of the US-Mexico Border 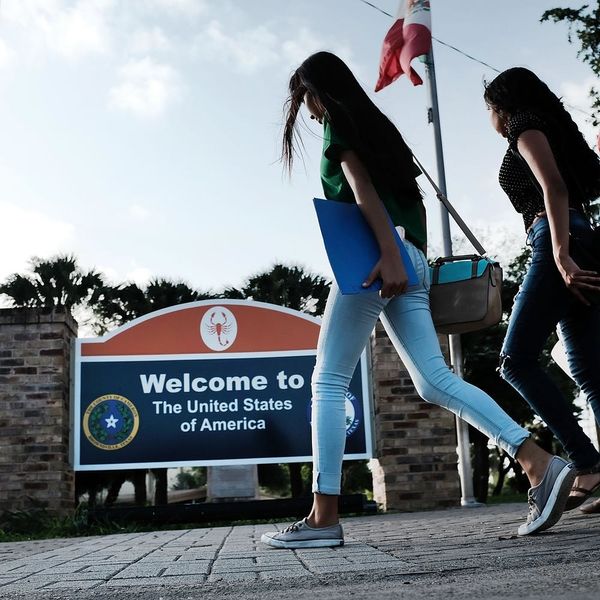 On Thursday, President Trump threatened to send up to 15,000 US military troops to the US-Mexico border, the next destination for a caravan of Central Americans heading to the US in order to seek asylum. Trump has fixated on the border as part of his radically anti-immigrant agenda. But the southern border was a focal point of the global struggle for refugee, asylum-seeker, and immigrant rights long before Trump entered politics three years ago.

what is the border, really?

But first: What actually is the border? The border is not a natural partition drawn in the ground by the forces of nature, but a strip of land that legally separates the US from Mexico. But this land wasn’t always a border space dominated by the US government. The line that divides what is now the United States from Mexico was not created and enforced until the mid-19th century, at the end of the Mexican-American war.

Even before the border was used to enforce immigration policies, the US government used the newly-created border area to forcibly remove Indigenous peoples from their land, and patrolled the border region to catch runaway slaves. But while strict, and even inhumane policies were immediate in the aftermath of the establishment of the border, affected communities quickly took direct action to resist.

In the early 1900s, Mexicans were required for the first time to acquire a passport in order to enter the United States legally, had to pass an English literacy test, pay a “head tax,” and were subject to crackdowns on contract labor. They were also subjected to humiliating and dangerous gas “baths”; these “delousing” procedures were allegedly intended to thwart the spread of typhus, but there was never any evidence that laborers were worsening the spread of the disease. Still, US officials sprayed Mexican laborers with pesticides or Zyklon B, the poisonous gas later used by Nazis in the Holocaust.

Carmelita Torres, a 17-year-old maid who commuted from Juarez, Mexico, to El Paso, Texas, for work, launched a massive protest over inhumane “delousing” practices US authorities forced on Mexican laborers when they crossed the border. On the morning of January 28, 1917, Torres refused to take the noxious “bath” demanded by US border authorities before she could go to work, and in a matter of hours was joined at the border by thousands of other Mexicans protesting the inhumane gas baths. The protest became known as the “Bath Riots,” and Torres was arrested for her role. Sadly, the US continued this horrible practice as late as the 1950s, but the protest is still considered an important movement for migrant rights.

As the border became an increasingly dangerous place for immigrants and migrants, Black people in border towns were also fighting abuses. During this period, vigilante border militias and the KKK were fixtures in border towns, and the Klan had an especially prominent presence in El Paso in the early 1920s, when the white supremacist organization was resurgent.

The same year the Border Patrol was established and brought year-round federal level officers to border communities in addition to far-right border militias such as the Klan, a Black physician in El Paso named Lawrence Aaron Nixon advocated for civil rights for Black people in his city. Nixon organized in his community to get a swimming pool for Black people, as well as a hospital for Black people with tuberculosis. Though some of these larger goals were not realized because Nixon and the Black community were not given adequate support from the local government, he and the NAACP successfully won a precedent-setting case that abolished all-white political parties. (Nixon was a registered Democrat.)

Jumping ahead a few decades to the 1980s, a major battle waged between the US government and several clergy members in border states who were working to aid Central American refugees. Ronald Reagan was president at the time, and his administration provided support to military regimes in Central America; ensuing conflict drove masses of Central Americans to flee their homes and seek refuge in the US. As immigrants crossed the US border into border states, local clergy and faith leaders began working with Central Americans to provide shelter and other basic necessities, and to help them seek asylum.

Reverends John Fife and Jim Corbett, both of Arizona, declared their churches sanctuaries for Central Americans fleeing wars at home, despite infiltration and threats from federal authorities. Fife and Corbett’s model of providing safe harbor to Central Americans in their churches spread to other border community churches, and became known as the Sanctuary Movement. Several faith leaders in the Sanctuary Movement were arrested and jailed for helping refugees, but the movement still lives on. Today, houses of worship around the country open their doors to people facing deportation from the US.

Decades later, conditions at the border have only become more hostile to immigrants, migrants, and people seeking asylum as multiple presidents sent military troops to the border, and the right continued to stir resentment and fear over immigrants. Even though Obama was a champion for the DREAM Act, he was not exactly a friendly president to immigrants. The Obama administration kept undocumented immigrant children detained on military bases, sent thousands of US troops to the border at various times, and deported a record number of undocumented immigrants.

As President Trump is now, Obama also held asylum-seekers in detention centers where they were subjected to various regretful conditions. In 2014, the ACLU sued the Obama administration on behalf of asylum-seeking Central American mothers and kids who were held in detention. Though it is legal to seek asylum when already on American soil, government observance of the law has been shoddy.

Later in 2015, a trans woman and immigrant rights advocate, Jennicet Gutiérrez, famously interrupted a speech Obama was making about LGBTQ+ rights in the White House. The president dismissed Gutiérrez to the cheers of the crowd, and she was denounced by liberals for “heckling” the president.

And now, here we are in the Trump era. The president has promised to send thousands of additional troops to an already heavily militarized border that has brought death, injury, humiliation, and suffering to millions of people. But among those millions, there have always been many who have fought back, resisting the harms the border brings by organizing for their rights, and protesting abuses.

Under Trump, thousands upon thousands of activists around the nation have raised funds to free families from ICE detention, protested ICE raids and the Muslim ban, boycotted companies who work with ICE, and more. While the border exists and is enforced with tactics that cross into inhumane territory, there will always be those who resist.

Elizabeth King
Elizabeth King is a politics, history, and culture writer based in the Twin Cities. She is generally pretty cranky but still enjoys traveling, music from the early 2000's, and plotting the resistance. Feel free to say hi on Twitter at @ekingc or check out some of her work at www.elizabethcking.com.
Activism
Politics
Activism Immigration Politics
More From Politics