Ordinary People Are Boycotting These Tech Companies to Protect Immigrants 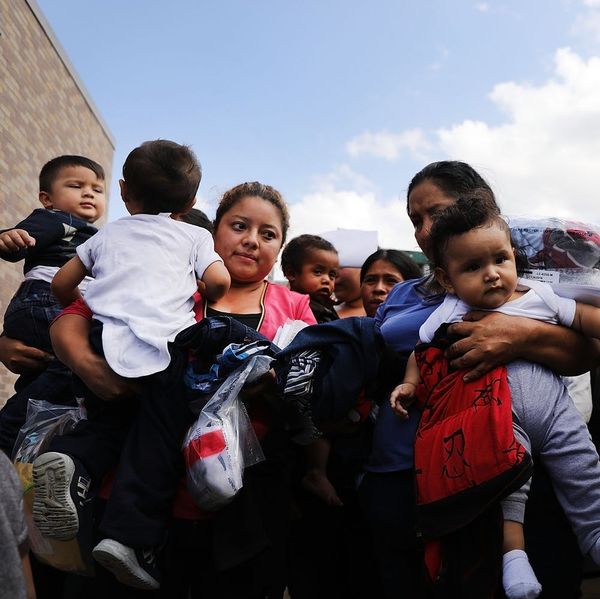 Immigrant rights activists are still going strong in the wake of the humanitarian crisis created by the US government in the 1990s and worsened by the Trump administration. Amid outrage over the administration’s “zero tolerance” immigration policy and concurrent family separation and detention, activists are taking aim not only at Trump, his party, and government agencies, but also at tech companies who turn a profit by providing services to ICE and Customs and Border Protection (CBP).

Jacinta Gonzalez, a field director for the immigrant rights group Mijente , tells Brit + Co that ICE simply couldn’t be operating as it does now without the assistance of new technology.

“What folks on the ground have been seeing for years, and intensifying under this admin, is ICE requiring technology to do their job at the scale that they’re doing,” Gonzalez tells us.

And so, Gonzalez and her cohorts are taking a stand. On Tuesday, Mijente protested outside the office of Palantir Tech in Palo Alto, California over the company’s contract with ICE.

According to a 2017 Intercept report, Palantir was awarded a $41 million contract in 2014 to create an intelligence system called Investigative Case Management (ICM). Using Palantir’s ICM, ICE agents have access to a broad “ecosystem” of data that is used to surveil and build cases against immigrants. Palantir was founded by Peter Thiel, who also advised Trump’s 2016 presidential campaign. Mijente was joined by other rights groups including Fight For $15.

Gonzalez explains the product Palantir provides to ICE as “Google for ICE agents.” She says that Palantir technology is what enables ICE agents to identify and surveil communities and individuals before carrying out raids.

In a letter addressed to Palantir CEO Alex Karp, activists wrote, “What’s happening at the American border is a national disgrace. It will be remembered by future generations as one of the lowest points in our history, and the stance of companies and people on this issue will be a litmus test for their ethical fortitude going forward,” Mercury News reports.

Employees at the company wrote an open letter to CEO Jeff Bezos, saying, “Along with much of the world we watched in horror recently as US authorities tore children away from their parents. In the face of this immoral US policy, and the US’s increasingly inhumane treatment of refugees and immigrants beyond this specific policy, we are deeply concerned that Amazon is implicated, providing infrastructure and services that enable ICE and DHS,” Gizmodo reported.

Hundreds of Salesforce employees have also spoken out against the company’s contract with ICE. In a letter addressed to CEO Marc Benioff obtained by BuzzFeed News last month, employees emphasize their concern “about the use of Service Cloud to manage border activities. Given the inhumane separation of children from their parents currently taking place at the border, we believe that our core value of Equality is at stake and that Salesforce should reexamine our contractual relationship with CBP and speak out against its practices.”

Microsoft employees were among the first to speak out against their companies’ contracts with law enforcement agencies amid the massive backlash against ICE and the Trump administration’s policies. At Microsoft, 100 employees wrote an open letter to CEO Satya Nadella in June. Hundreds more employees signed the letter after it was released. In July, advocates delivered a petition with approximately 300,000 signatures demanding the end to Microsoft’s relationship with ICE.

The civil rights advocacy non-profit Color of Change has launched a petition calling on a number of tech companies, including Dell, Motorolla, Salesforce and Microsoft to cancel contracts with ICE and CBP.

“Microsoft, Salesforce, Thomson Reuters, Hewlett Packard, Motorola, and Dell are all complicit in and profiting from a mass incarceration and deportation scheme hatched by a white supremacist presidential administration,” the petition reads.

With energy continuing to build in opposition to tech companies contracting with immigration enforcement agencies, Gonzalez says many people are now seeing ways they can get involved.

“It’s a really exciting moment where you have everyday people in the US outraged and wanting to take action,” she says. “That includes people who buy these companies products and the employees at these companies.”

There’s recent precedent for internal pressure from employees coupled with public protest prompting tech companies to drop harmful government contracts. Several Google employees resigned in protest earlier this year after the company’s plans to partner with the Pentagon to create artificial intelligence technology came to light. Google had agreed to work with the US military on a project called Project Maven, which would aid in the analysis of drone footage. After public backlash and protest from employees, Google declined to renew its Pentagon contract.

Elizabeth King
Elizabeth King is a politics, history, and culture writer based in the Twin Cities. She is generally pretty cranky but still enjoys traveling, music from the early 2000's, and plotting the resistance. Feel free to say hi on Twitter at @ekingc or check out some of her work at www.elizabethcking.com.
Activism
Current Events
Activism Immigration
More From Current Events