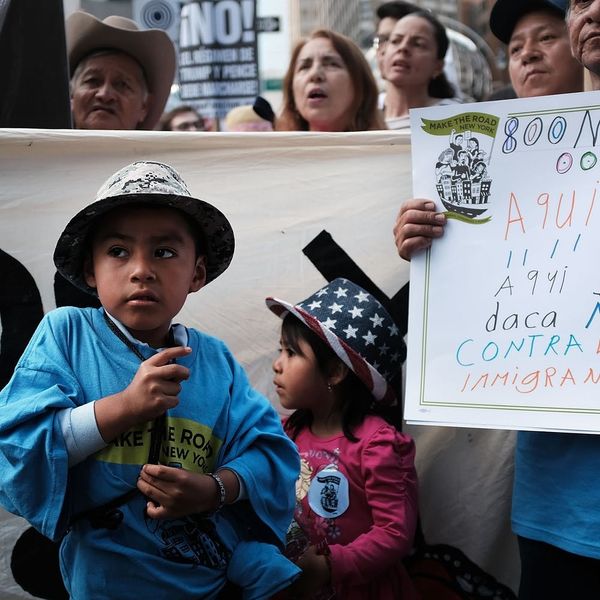 From day one, the Trump administration has been steadily working to roll back a number of Obama-era policies, including the Affordable Care Act, trans participation in the military, and Deferred Action for Childhood Arrivals (DACA). DACA provides relief from deportation and authorization to work and study for children of undocumented immigrants who were raised in the United States, and President Trump is threatening to get rid of it.

The present deadline for the president to decide what to do about DACA is September 5. But in the meantime, hundreds of thousands of undocumented immigrants and their families are panicked about what will happen if Trump rescinds DACA.

DACA was established in 2012, and is often discussed in relation to the DREAM Act and Dreamers. The DREAM Act was introduced in 2001, and aims to create a path to citizenship for undocumented young people. “Dreamers” are young people who qualify for the DREAM Act.

The DREAM Act is popular among Democrats in Congress, but Republicans voted against it in 2010 and it most likely won’t pass under the current administration. There are currently more than 750,000 DACA recipients, according to the Pew Research Center, all of whom have a great deal to lose. It’s not totally clear what will happen if DACA is rescinded, but losing DACA status puts undocumented immigrants at risk of losing their work permits and even their ability to remain in the US without threat of deportation.

In fact, DACA DREAMers, (sometimes called DACAmented DREAMers) are not currently safe from being deported, even though DACA should allow them to remain in the US. Juan Manuel Mantes, 23, who came with his family to the US when he was nine years old, was deported in February despite the president’s previous claims that he would not deport undocumented immigrants who arrived to the US when they were children. This leaves undocumented people in the terrifying position of not knowing whether or not the current protections are enough, and fearful of what will happen if Trump follows through on his DACA threats.

Since Trump took office and it became clear DREAMers were not necessarily safe from deportation, DACA recipient Viridiana Hernandez tells Brit + Co that she hasn’t been leaving her home as often. Hernandez says she not only fears for herself, but also her parents, adding that she knew these dangers would rise under Trump. “The fact that we’ve worked so hard to build what we have, and earning it the right way, I don’t think it’s fair to lose it all in one day.” She tells us that she is praying Congress will stop Trump so DACA can continue.

Juan Escalante, a DREAMer and the Digital Campaigns Manager for America’s Voice, an immigrant’s rights advocacy organization, says that since Trump took office, his parents have been terrified. His family is from Venezuela, but he has lived in the United States for 17 years, and faces immediate deportation if DACA is rescinded. With his 30th birthday coming up, Juan tells Brit + Co, “I don’t want to have my life on hold when I start another decade. I want room to breathe, live a normal life, and have the freedom to exist without fighting for my right to live in the country I consider home.”

Because of the public nature of his advocacy work, Escalante says he fears that the Trump administration could retaliate against him. He tells us that he could easily be found and then deported, a reality that haunts Escalante, his family, and undocumented immigrants around the country.

How you can help

Activists have been using Twitter as part of their campaign to keep DACA in place, using the hashtag #DefendDACA among other viral tags to educate and mobilize the public around the issue. In addition, both Hernandez and Escalante tell us that concerned citizens can contact their representatives and senators in Congress, and ask them to stop Trump from rescinding DACA. Escalante also suggests donating to local organizations that support immigrant rights and recommends United We Dream, National Immigration Law Center, and America’s Voice.

Do you have thoughts about the president’s threat to rescind DACA? Tell us on Twitter @BritandCo.

Elizabeth King
Elizabeth King is a politics, history, and culture writer based in the Twin Cities. She is generally pretty cranky but still enjoys traveling, music from the early 2000's, and plotting the resistance. Feel free to say hi on Twitter at @ekingc or check out some of her work at www.elizabethcking.com.
Immigration
Current Events
Immigration
More From Current Events