This Brilliant Student Uses Her Manicure to Get on the Subway 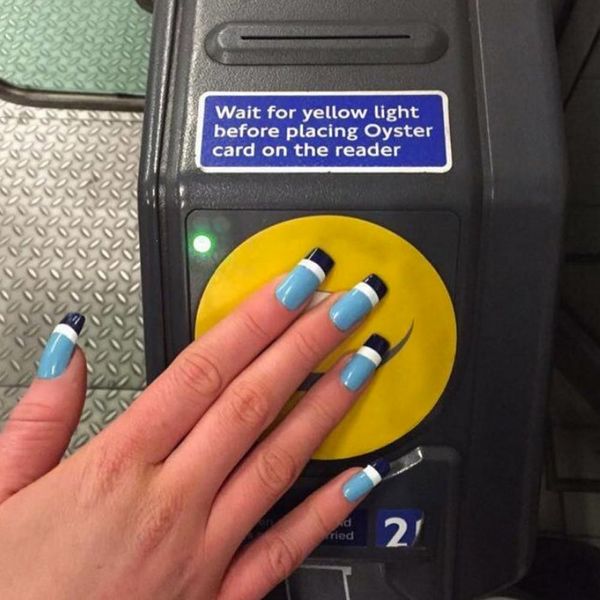 No one can deny that using the subway is *way* more convenient than driving in a super jam-packed city. It even has occasional love-life perks (remember the woman who panhandled for love on the MTA?)! But public transportation certainly has its drawbacks — generally, involving subway cards. There’s nothing quite as frustrating as getting to your stop and realizing you’ve lost your card. But one student has thought of a totally brilliant solution… by getting her subway chip embedded into her manicure.

According to Laughing Squid, Central Saint Martins jewelry design student Lucie Davis decided to get a manicure the same color as an Oyster Card, which is used to enter the London Underground. But the magic of the manicure doesn’t lie in the color; she embedded the chip from her Oyster card within the manicure so that she just needs her hand to get in. Pure brilliance.

“I took the RFID chip from an Oyster card and embedded it within a full set of acrylic nails to give commuters the ability to pay for their journeys with a single tap touch,” she said, according to Laughing Squid. “…You can still top them up with money too. Now you’ll never have to worry about misplacing your card again!”

Don’t believe it? Lucie posted a video of the manicure in action:

Touch in and out - Oyster card acrylic nails with RFID chip - Last chance to come and see them in my final collection at the Central Saint Martins degree show! All inspired by engaging with our daily surroundings... #csmloading #jewellerydesign #technology #nailart #luciedavis #everydayvalue #interaction #information #decoration

What do you think about this ultra-practical manicure? Tweet us @BritandCo!