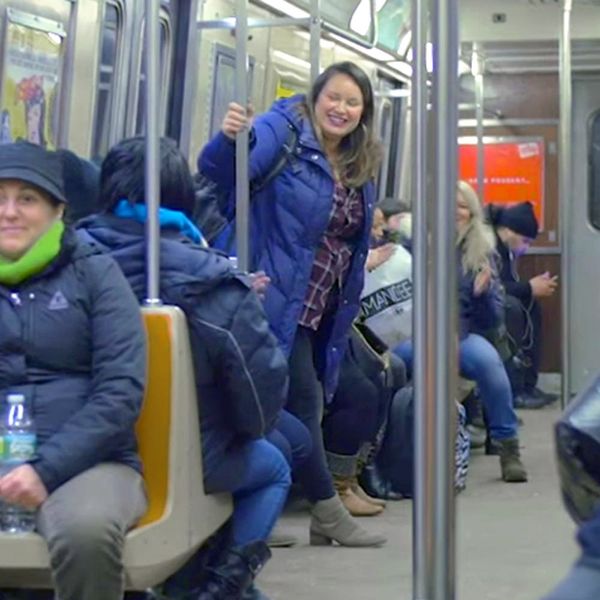 Dating is a lot of things, and easy is not one of them. One can only endure so many awkward drinks with dating app duds. But what’s the alternative? Maybe that means you make a move to one of the best cities for dating, or if you’re Jana Schmieding, a comedian and teacher, maybe it means taking to the NYC subway to find a dream man.

In a surprisingly touching new Youtube video, Jana documents a super brave experiment: panhandling for a date on public transportation. After breaking that awkward silence you always tend to experience on a train, Jana announces, “I am single and unfortunately, it’s gotten to the point where I need to rely on the help of strangers. I’m not asking for change today. In fact, if somebody were to take me out I prefer to split the bill!”

Jana goes on to explain that she’s 34 years old and has yet to have the romantic experiences many others have had. After her spiel is over, one passenger hands her his friend’s business card. Another offers up her husband she’s about to divorce. A third writes down someone’s Twitter handle. Overall, the response was unexpectedly heartfelt. One woman tells her, “I didn’t meet anyone until I was 32.” Soon after that someone else chimes in adding, “You still have time. Still have hope.”

After she endured such a courageous act, we decided to catch up with Jana to see how this experiment has panned out for her (pun fully intended). She tells us, “I have yet to go on any dates but only because right after doing this subway performance art, I had a very intense sinus infection and then left town for vacation. Trust me, when I get back to the city, I will be hollerin’ at those numbers. That’s a whole other level of this project that I haven’t really thought through.”

Whether her dream husband’s number is on that business card she was given isn’t really the point though. She explains, “I’ve learned that exercising bravery and achieving personal goals are powerful tools in overcoming deep loneliness. I’ve learned that New York City isn’t full of harsh people. It’s more of a harsh environment where strong-willed people are always looking to be warmed. I’ve also learned that I might end up being single for the rest of my life so I better really like who I am right now!”

What the most creative thing you’ve ever done for a date? Share with us on Twitter @britandco.

Cortney Clift
Cortney is the senior writer and special projects editor at Brit + Co. She typically covers topics related to women's issues, politics, and lifestyle. When she's not buried behind her computer you'll find her exploring New York City or planning her next big adventure.
YouTube
Home News
YouTube