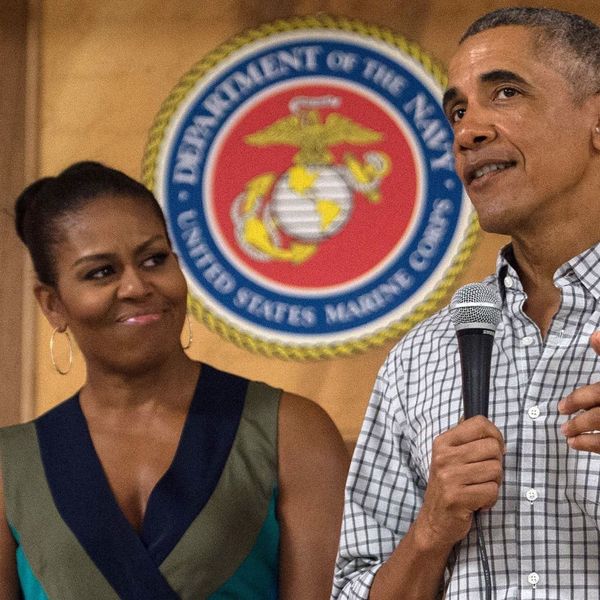 We already knew that Barack and Michelle Obama were basically the cutest — anyone with eyes to glimpse these 12 heartwarming moments can see that — but they just may have had their sweetest moment of all while standing together at this morning’s Presidential inauguration.

In the midst of speech scandals, unbelievable fashion moments and a somewhat thinner-than-expected crowd, Barack made the tiniest of gestures toward his wife of 24 years, but it was enough to have those that caught it going gaga.

With one blink-and-you’ll-miss-it move, Obama lifts his wife’s hand to his mouth for a reassuring hand kiss in the midst of all the chaos. Can we get a closer look at that!?

Apparently, we weren’t the only ones…

No I'm not crying as Barack Obama kisses Michelle's hand and leaves the White House for the last time….. 😅😭😭😭

And Obama kisses Michelle's hand!! It was great having a feminist president! https://t.co/KbnNx98LMM

Up next for these two lovebirds? A well deserved vacay!

Hi everybody! Back to the original handle. Is this thing still on? Michelle and I are off on a quick vacation, then we’ll get back to work.

We can only imagine the adorable moments these two will share on their time off in Palm Springs — Maybe, if they’re lucky, they’ll even let us in on a few via social media. (We’ll be watching!)

Do you think Barack and Michelle are the cutest couple in politics? Tells us over @BritandCo!

Nicole Briese
Nicole is the weekend editor for Brit + Co who loves bringing you all the latest buzz. When she's not busy typing away into the wee hours, you can usually find her canoodling with her fur babies, rooting around in a bookstore, or rocking out at a concert of some sort (Guns N' Roses forever!). Check out all her latest musings and past work at nicolebjean.com.
Celebrity Couples
Entertainment
Celebrity Couples love Politics
More From Entertainment