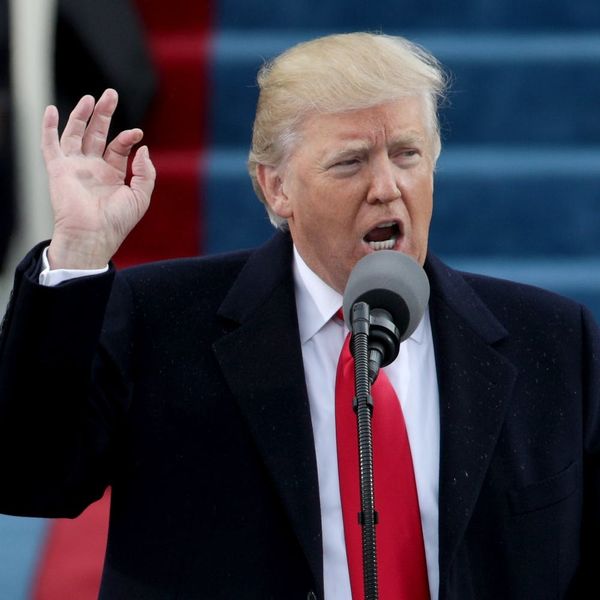 The presidential inauguration has given us plenty to talk about — the shocking pics of the event, Melania’s outfit, celebs’ reactions (including those of Hillary Clinton and the Obamas), not to mention what Trump himself had to say to the country. And while Melania Trump may have lifted her words from Michelle Obama a few months back, part of Donald’s inauguration speech today was coincidentally, ironically, hilariously similar to someone else’s words to the people. We’re talking about the Batman villain Bane.

“Today’s ceremony, however has very special meaning. Because today, we are not merely transferring power from one administration to another or from one party to another,” Trump told the crowd attending the inauguration, as well as everyone watching from afar. “…we are transferring power from Washington DC and giving it back to you… the people. For too long a small group in our nation’s capital has reaped the rewards of government while the people have born the cost.”

Folks couldn’t help but notice how close that section was to Bane’s declaration, “We take Gotham from the corrupt! The rich! The oppressors of generations who have kept you down with myths of opportunity, and we give it back to you… the people.”

Although the mask-wearing villain added, “Gotham is yours. None shall interfere. Do as you please… spoils will be enjoyed. Blood will be shed… this great city… it will endure. Gotham will survive!” Let’s hope we’ll survive as well. Perhaps it’s time for a dark-winged superhero to sweep out of the shadows to save the day.

#Trump accidentally quoting Bane gave me the giggle fits. Now we just need Michelle Obama to pull a Catwoman with the Batpod.

Donald Trump will be the Bane of our lives! https://t.co/EQoRd9Rh5u

Also, Trump should now wear a Bane mask during all public appearances and talk like him during press conferences and interviews.

Now that Mark Hamill is reading Trump's tweets in his Joker voice, could we get Tom Hardy to read his inaugural address as Bane?

How do i tell my children THIS shit?? Yea Trump stole bits from "The Dark Knight Rises" for his speech 😭😭😭😭 no not from Batman, Bane

What do you think about the similarity between Trump’s speech and Bane’s? Tweet us @BritandCo!