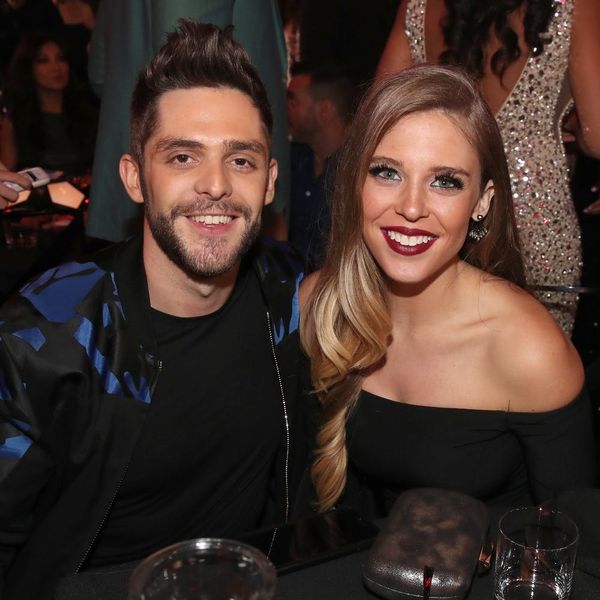 While plenty of celebs were celebrating the moms in their lives this past weekend, country singer Thomas Rhett and his wife Lauren were marking their very first Mother’s Day by bringing home their baby girl after a year-long adoption process. OMG, the emotions are already overwhelming. But hold on, friends, because that’s just the start of this heartwarming tale, as Rhett shared a tribute to his love that is a rollercoaster of emotions.

In a story that’s all about following your heart, 27-year-old Rhett revealed to People that he and his wife, Lauren, had been trying to get pregnant without success when she went on a trip to Uganda. That’s when Lauren met 18-month-old Willa Gray Akins (who happens to have the adorably apt nickname “Blessing”), a child who had been orphaned as a newborn.

Ohhh my goodness-the LOVE I have for this one 💛

When Thomas saw a picture of his love with little Willa, he says, “Lauren had this amazing glow about her and it just felt like [Willa] was already our daughter in a weird way.” Rhett admitted, “I just blurted out, ‘We should bring her home.’” And while the couple had already discussed the possibility of adoption, it took a daunting amount of paper work and a dozen trips to Uganda over the past year before things were finally settled.

YALL 😩🙌🏼😭💗 Our baby girl is hommmmeeeeee 🎈🇺🇸💙🇺🇸🎈 Thank you Jesus for bringing our family together on the same continent finally :) little cutie Willa Gray Akins came home yesterday after completely stealing our hearts in Uganda over a year ago & we're sooooo happy we just can't stand it 💛💛💛💛💛💛💛💛💛💛💛💛💛💛💛💛💛💛💛💛💛💛💛💛💛💛💛💛💛💛💛💛💛💛💛💛💛💛💛💛💛💛 • • • **PARENTS OF THE YEAR: thank you mom & dad for bringing her home since this pregnant mama is officially grounded due to baby Akins #2 coming in August 😩💚💚 • • • **FRIEND OF THE YEAR: thank you sweet @kaileydickerson for capturing some of the most special moments for us & for traveling with me to Uganda and back😘💗💗 • • • ** our FRIENDS & our FAMILY OF THE CENTURY: y'all have walked through and prayed through every single moment of this adoption with us, were our ROCKS through it all, kept it a secret, and truly had faith & hope for us when we felt like we had none left. I could cry thinking about each one of you-y'all know who you are & we are beyond blessed with our community God has given us🙏🏼 we love y'all more than any words could come close to describing. I might just throw you all a giant party celebrating y'all 😭😭💪🏼🙌🏼😘😘😘😘 • • • BRB STILL FREAKING OUT OUR DAUGHTER IS HOME 🇺🇸🇺🇸🇺🇸😩🌈👼🏾💪🏼🎉🙏🏼😭🙌🏼💚🎈💗💗

On Thursday, the excited parents were finally able to welcome their new daughter home. “On the way to the airport, it was like Christmas Day,” Rhett said, with Lauren adding, “It felt like a dream. I’ve dreamed of us all being on the same continent for so long. It finally feels like everyone is where they’re supposed to be.”

Thomas was quick to show his appreciation of the new mama in his life, spanning his gratefulness of her hotness to her humor, and even his inability to function when she’s not around for more than a few days. It was clear he was having ALL of the feelings… and now so are we!

Babe.. not only are you the hottest mom you are the sweetest, funniest most kind hearted human being that I know. I know you didn't plan on marrying a singer when you were sitting in your 3rd grade class room but I'm so glad you did. I couldn't imagine my life without you. Seriously you know how lost I get when you are gone for 2 weeks😂 I love you so much and happy 1st Mother's Day. You already are a rock star at being a mom. You + me+ Willa

Sharing a pic of Lauren and Willa with his Instagram followers, Rhett included the message, “Babe.. not only are you the hottest mom you are the sweetest, funniest most kind hearted human being that I know. I know you didn’t plan on marrying a singer when you were sitting in your 3rd grade class room but I’m so glad you did. I couldn’t imagine my life without you. Seriously you know how lost I get when you are gone for 2 weeks😂 I love you so much and happy 1st Mother’s Day. You already are a rock star at being a mom. You + me+ Willa.”

Again: ALL of the feelings!

BUT WAIT! That’s not where the happy news ends for this adorable family. While waiting for Willa’s adoption to go through, Lauren found out that she’s pregnant with a baby girl! That’s right; this family of three will soon be a family of four, with Lauren due in August. Eee!

Thank you Lord for this woman

Congratulations, Thomas and Lauren, and of course little “Blessing” Willa!

Were you overwhelmed with FEELINGS by this super sweet story? Let us know @BritandCo!