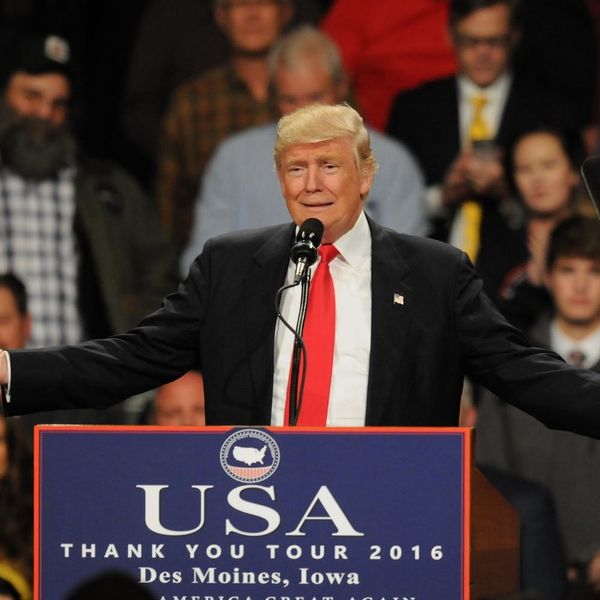 Warning: This will make your blood boil. While Trump’s Time Person of the Year cover was saying WAY more than you think and his ongoing TV interests are making people seriously concerned, another issue has just popped up that is incredibly serious and totally terrifying.

Back in October of 2015 (yep, over a year ago!), then-18-year-old Lauren Batchelder was attending a political forum in New Hampshire when she said to Trump, “So, maybe I’m wrong, maybe you can prove me wrong, but I don’t think you’re a friend to women.” After Trump defended himself, Lauren asked if she would get equal pay and access to abortion under a Trump presidency. He answered by saying, “You’re going to make the same if you do as good of a job, and I happen to be pro-life, okay?”

And that was that. Or, at least, it should have been. But this is Trump we’re talking about.

The next morning, Lauren woke up to find out that Trump had been tweeting about her.

The arrogant young woman who questioned me in such a nasty fashion at No Labels yesterday was a Jeb staffer! HOW CAN HE BEAT RUSSIA & CHINA?

He tweeted, “The arrogant young woman who questioned me in such a nasty fashion at No Labels yesterday was a Jeb staffer!” That happens to be untrue. She is not and never has been a “Jeb staffer.” Beyond that, though, is the relentless onslaught of mistreatment and threats Lauren has suffered since.

Trump’s followers immediately began tweeting horrible abuse at Lauren as well as publicly posting her phone number and other personal information online. She was attacked via phone, email, Twitter and Facebook. “I didn’t really know what anyone was going to do,” Lauren told the Washington Post. “…I didn’t really know what his supporters were going to do, and that to me was the scariest part.”

And it hasn’t stopped. For over a year now (!!!), Lauren has received endless harassment and threats of death and rape. She’s shared a sampling of the messages and OMG. We won’t repeat them here, but you can’t imagine how horrible and truly terrifying they are.

It’s not the first time someone who Trump’s targeted has suffered from unimaginable attacks via our now President-Elect’s followers, and it likely won’t be the last either, unfortunately.

Are you shocked by how Trump’s supporters are attacking a teen girl? Tweet us @BritandCo!

(h/t The Cut; photos via Steve Pope, TIMOTHY A. CLARY/Getty)

Desiree O
Desirée O is a ‘Professional Bohemian’ who loves anything and everything related to the arts, entertainment, and pop culture. She ADORES being a ‘Newsy’ for Brit + Co, covering all of the latest tidbits of awesomeness that you want to read about. When she’s not writing, she’s either making messy art, going on long adventurous walks with her camera, or poking around over at bohemianizm (http://www.bohemianizm.com/). You can find out about Desirée O and her work at http://DesireeO.com/ or follow her on Twitter @DesireeO.
Politics
Politics
Politics twitter
More From Politics