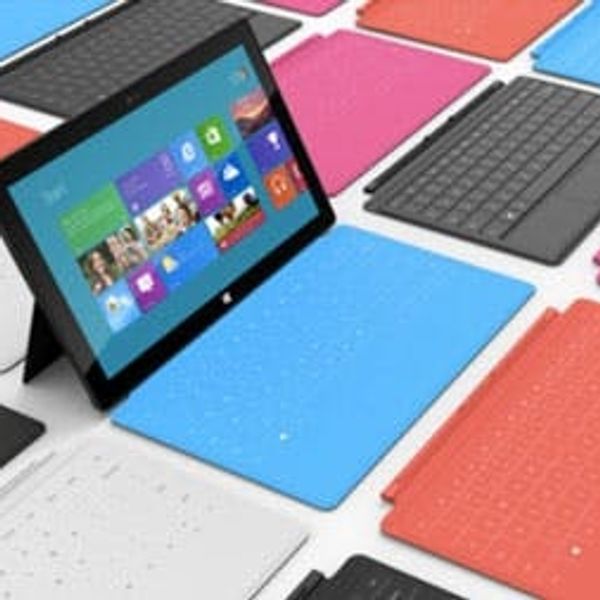 We'll be the first to admit, we're pretty hung up on everything Apple puts out, especially the iPad. A couple weeks ago we rounded up the best iPad keyboards, we've obsessed over creating artwork on the go with Paper, and we even created our own DIY touchscreen stylus. We just love accessorizing our Apple products, and getting the newest version of iEverything as soon as it comes out.

But, in the world of tablets, Apple's got some fierce competition. Just yesterday Microsoft officially introduced Surface, Google's rumored to be releasing a new tablet in July, and the Kindle Fire is kind of on FIRE these days. Here's a primer on all the non-iPad tablets out there, what they do, how they do it, and why each one is worth taking a second look at.

Microsoft Surface (Price TBD): Having just been unveiled on Monday in LA, there are still a lot of questions to be answered, including the price. We know it will be "priced like comparable tablets." But what makes it worth checking out? Like the iPad, Surface is light, portable, and ridiculously easy to use. Unlike the iPad… it's a PC. Duh! Ok but it does look pretty awesome and we love that the magnetic cover doubles as a keyboard. It's thick enough to accommodate a USB port and the display is just about an inch larger than the iPad. Consider us intrigued.

Nook Tablet ($199): Here's the deal. The Nook is awesome and colorful, you can watch movies, read books and magazines, play popular games, and technically you can browse the web. But really, it's a glorified e-reader. For us, the best thing about the Nook is the size and price, and how easy it is to browse various media.

Amazon Kindle Fire ($199): Like the Nook, the Fire is all about media. You get seamless access to Amazon's impressive collection of music, movies, magazines, and books, and a curated Android app store. But, it's still a Kindle. You don't have a camera, microphone or GPS, and the web browsing isn't quite as intuitive as an Apple product, but it's good for the price.

Samsung Galaxy Tab ($245): For just a little bit more, the Samsung Galaxy Tab delivers quite a lot more. It includes dual cameras, expandable memory, and TV remote-control functionality. And, of course, you can explore media and mobile apps to your heart's content. As far as Android 4.0 tablets go, this one is definitely the best option out there.

Sony Tablet S ($399): Sony is, so far, the only one to really give Apple a run for the money in terms of screen quality. Sporting a shifted center of gravity, this tablet is reported to feel much more comfortable in one hand than the iPad. The slightly wedged shape means the center of gravity is on one side, and this actually could make quite a difference if you use your tablet for meetings, presentations, and the like.

Android Asus Transformer Prime ($499): This tablet is more of a tablet system. Fully embracing the idea of replacing your laptop with a tablet, this Android option truly is a mini computer. We wonder how much work you could actually get done on such a small screen, but with 18 hours of battery life those international trips could be a whole lot more productive.

Anjelika Temple
As Co-Founder and Chief Creative Officer of Brit + Co, Anjelika Temple brings her voracious consumption of all things creative and colorful to DIY projects, geeky gadgetry finds and more. When she's not DIY-ing her heart out, you'll find her throwing dinner parties with friends or adventuring with her husband David, their daughters Anokhi and Indira, and their silly dog Turkey.
Tablet
Tech
Tablet
More From Tech