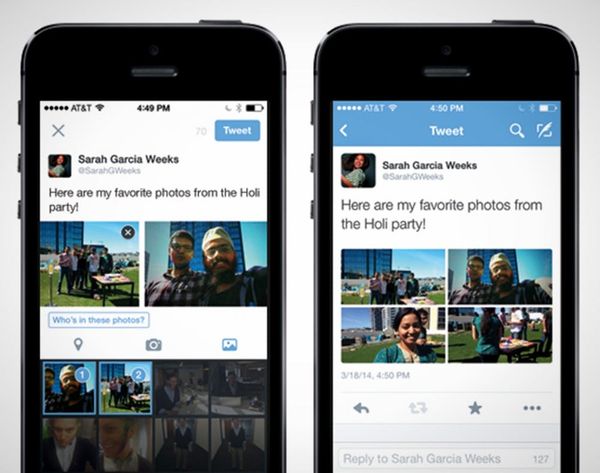 It’s time to upgrade your Twitter app, Tweeters. The social network is rolling out two major features that will change how you can share photos from your phone — and they may remind you of that other social network.

From now on, you can do more than just Tweet pics, you can tag whoever is in them too. Twitter’s new photo tagging option will let you name up to 10 friends and fellow Twits in pictures you tweet mobilely. Just pick a photo, tap on “Who’s in this photo?” type and choose the name of the person you want to tag. It won’t touch your 140 character count either.

When you Tweet your photos, the tags appear next to them and you can click through to get to each person’s profile. We just might have to test this bad boy out at our next Brit+ Co SF event!

You’ll also be able to share mini-albums in one fell Tweet with the ability to add up to four photos in each message. Pictures in Tweets already make them more shareable, and the hope is that that can only increase by shouting out everyone (places that have @handles too!) in each shot. This could mean something different for personal Twitter users, brands and news orgs. The average Tweeter might be more apt to RT or Favorite a picture of themselves or friends (compare the LIKEs on your FB pics with the RTs of a Twitpic — not even close right?). Breaking news Tweets can now include shots from the scene with places and people identified in them. Companies could invite you behind the scenes, maybe showing different steps to making something special (hmm, we have some ideas ;)

With tagging and mini albums, we’re guessing our feathered friends are trying to cop some of the Facebook photo love (shoulda bought that Instagram, Tweeps). While FB is on a little shopping spree, Twitter is going through some changes of its own beyond mobile photo updates. First, they’re testing out swapping the RT button for a “Share” option instead. They’re also back in the music game; after giving Twitter #Music the boot, they announced a partnership with Billboard to create Billboard Twitter Real-Time Charts that will track the tracks you’re Tweeting. We hope they stick with the Retweet (#sentimental) but love the idea of having a music chart devoted to what’s making us buzz. It’s why we love Spotify and scoping out what our friends are listening to so much.

The new photo features are just starting to roll out to iPhone now and are coming soon to Android and Twitter.com.

Speaking of Twitter, are you following @britandco? And @brit? Do it to it! That Follow button hasn’t changed. Yet.

Lisa Raphael
In her past professional lives, Lisa has served the masses as the Editorial Director at Brit + Co, Bieber Whisperer at J-14, Golden Girls Fan Club Prez at Lifetime and Talk Show Host Understudy to Katie Couric. Now, she's taking on the sports world at The Relish, teaching Hairography 101 in her spare time and will forever be trying to fill the hole Zayn Malik left in her heart.
Apps
Tech
Apps Facebook twitter