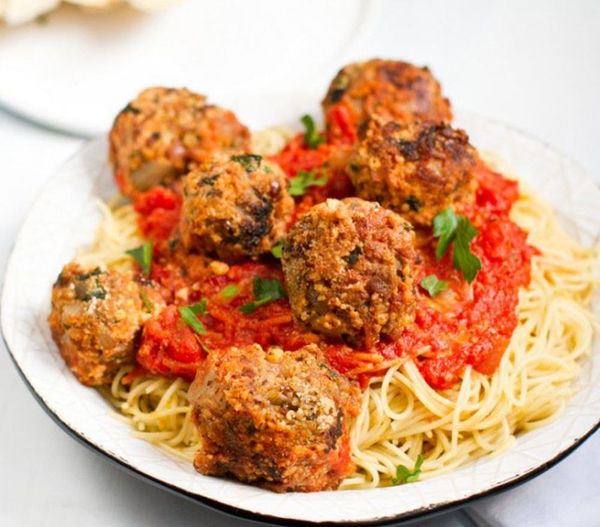 Get ready for some real talk: From one veg head to another, sometimes meat dishes just look so darn delicious. Whether you’re an herbivore-4-life or you’re just taking a brief relief from beef, here are 15 mouthwatering vegetarian versions of common meat dishes that’ll even make your steak-lovin’ friend green with envy.

1. Vegetarian Chicken Noodle Soup: The cold months are almost behind us, but you can still make the best of the remaining snowy days with this slurp-worthy soup. (via Oh My Veggies)

2. Vegan Buffalo Wings: We can barely believe that these wings are vegan. You know what else is great? The fact that they’re easy to serve on a stick. (via The Edgy Veg)

3. Sweet Potato Chili: Sweet potatoes are one of the best substitutions for any kind of meat. Not only are they power-packed with a whole bunch of fiber and vitamins, but their heartiness adds a whole lotta deliciousness to your food. (via Cookie and Kate)

4. Vegan Bacon: If you’ve recently converted to vegetarianism, bacon may be the food you miss the most. Not to worry! Oyster mushrooms are a great substitution. Their robust flavor stands up to the bacon challenge. (via Herbivoracious)

5. Vegetable Paella: A favorite food of the Spaniards, paella is typically made with seafood. However, super-chef Jessie Monds has come up with a great veggie-packed version, full of texture and flavor. (via Jessie Monds)

6. Matzo Ball Soup: Once you wear out that vegetarian chicken noodle soup recipe, just roll on over to this matzo ball soup. (via The Chubby Vegetarian)

7. Thai Peanut Satay: This delectable version of a beloved Thai recipe uses seitan, a really great substitute for any kind of meat. But believe us. The peanut sauce is the real winner of this dish. (via Forlou)

8. Vegetarian Pot Pie: The good ol’ pot pie. The addition of fennel to this version makes it extra tasty, in our humble opinion. (via Food Network)

9. Mushroom Burgers with Almonds and Spinach: We absolutely love all kinds of veggie burgers, whether they’re made with black beans or… mushrooms! Isn’t this so much classier than a regular hamburger? (via The New York Times)

10. Spaghetti + No Meatballs: It’s hard to have your own Lady and the Tramp moment if you can’t eat spaghetti and meatballs! Lucky for us, there’s a vegan version of this classic dish. (via Healthy. Happy. Life.)

11. Mughlai Vegetable Biryani: Biryani is a South Asian dish with tons of history. It was originally brought over to India by Muslim travelers from Turkey and Persia. You better believe you’re going way back with this recipe, which was inspired by the Mughal Empire. (The more you know… ) (via Veggie Belly)

12. Lettuce Wraps: Lettuce wraps are a great way to get your protein without the excess carbs of a regular wrap. And don’t worry, they’re still just as flavorful. (via The Pioneer Woman)

13. Grilled Flatbread: So, grilled flatbread might be a far cry from a grilled steak. We just couldn’t pass up sharing this beautiful recipe with you all. (via Bon Appétit)

15. Vegan California Rolls: Last but not least, vegetarian sushi is actually a lot easier than it seems. Check out this awesome recipe for vegan California rolls! (via Healthful Pursuit)

Which meat dish would you want to recreate? Share your thoughts with us below!

Sonia Rao
Sonia is a determined, television-obsessed gal on a quest to find the best cinnamon waffles recipe out there. If she isn’t researching the latest fashion trends or avidly crafting, you can catch her curled up on the couch with a few (meaning a billion) cookies, watching the hilarious antics of Leslie Knope or Mindy Lahiri. Sonia loves writing for Brit + Co as much as she loves desserts, and is equally proud of her quirky, pop culture reference-filled Twitter feed.
recipe roundup
Recipes
recipe roundup Vegetarian Recipes
The Conversation