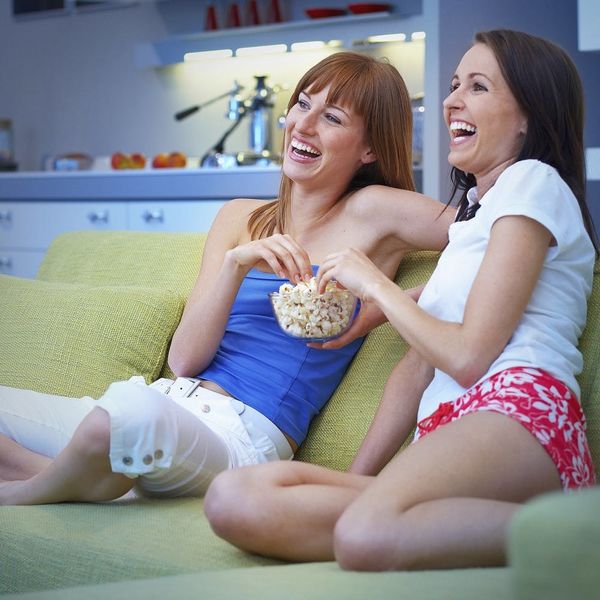 The US is set to see some record temperature highs this weekend as that heat wave rolls through. So you’ve got two options: Either sit out by the pool all weekend long or, if you’re pool-less (us too!), queue up these 10 shows and movies and refuse to leave your air conditioning. It’s brutal out there.

1. Fighting on Netflix and Amazon: Channing Tatum stars as a street vendor who sells counterfeit merch and moonlights as a fantastic street fighter. It’s a sports movie with grit and heart that will have you more interested in street fighting than you thought possible. (Photo via Rogue Pictures)

2. Vikings on Hulu: The History Channel favorite is back for another season, now streaming on Hulu. The drama about Ragnar Lothbrok, one of the most famous Vikings throughout history, is not only gripping and action-packed, it’s an interesting and informative look back on how Viking warriors lived and conquered. (Photo via History Channel)

3. Z for Zachariah on Amazon: It’s hard enough being among the last people on the planet. It’s even harder when you’re caught up in a love triangle with the only other people left on the planet. Of course, things don’t go well, and it quickly becomes a battle for survival. (Photo via Silver Reel)

1. Endgame on Amazon: Taking place during the last days of Apartheid in South Africa, you can guess that this film is emotionally intense. It’s an illuminating take on secret talks that took place in a country house in England and examines how much of South Africa’s important change was decided outside of the country. (Photo via Daybreak Pictures)

2. Our Brand Is Crisis on HBO and Amazon: Sandra Bullock and Billy Bob Thornton star as American image strategists brought to Bolivia to work for opposite sides of a presidential campaign. But they don’t realize just how much is at stake in this very, very controversial election until it’s over. (Photo via Warner Bros.)

3. Man of the Year on Showtime: The late, great Robin Williams plays the host of a political satire show who decides to run for president. Due to a machine glitch, he ends up winning. The rest of the movie is a political thriller, specializing in cover-ups. The all-star cast also includes Laura Linney, Christopher Walken, Lewis Black and Jeff Goldblum. (Photo via Universal Pictures)

HOW TO MAKE IT BIG

1. Barely Famous on Hulu and Amazon: When it seems like everybody wants to be famous, this reality show about sisters who SWORE they would never have a reality show is refreshing. It’s tongue-in-cheek, clever and casts a good, long look at Hollywood and Hollywood wannabes. (Photo via VH1)

2. BoJack Horseman on Netflix: Will Arnett plays a horse who was once the star of a ’90s sitcom. But now, the washed-up horse-actor decides it’s time for a comeback. The very funny show is back for a third season of its signature deadpan, existential comedy. (Photo via Netflix)

1. Looking: The Movie on HBO: If you were a fan of Looking when it was just a show on HBO, you’ve got to come back this weekend for the movie. It follows Patrick (Jonathan Groff) as he goes back to San Francisco years later to seek closure with his old relationships. (Photo via HBO)

Cailey Rizzo
Cailey is a junkie for all things pop culture. She studied journalism and English literature at SUNY Purchase, then continued studying French cinema and literature at Paris IV Sorbonne. She currently lives in New York where she can often be found singing '70s music at karaoke bars.
Netflix
Pop Culture
Netflix
More From Pop Culture