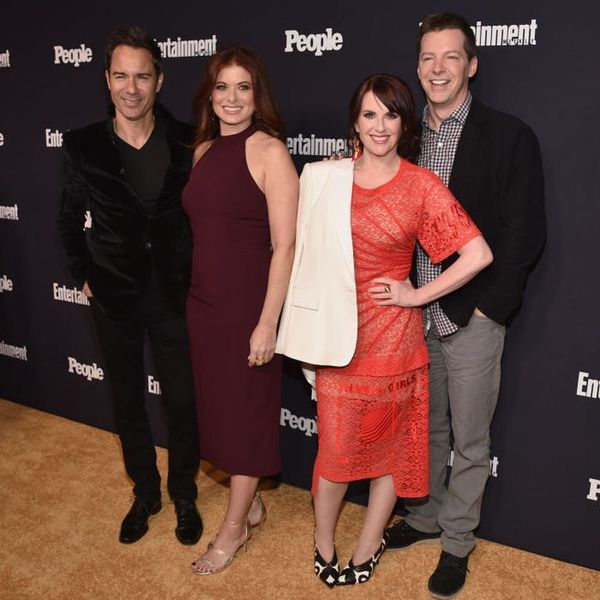 We can’t deny that we love a good reboot, and we are unbelievably excited for the return of Will & Grace. (FYI: Be sure to check out this sneak peek at the reboot script, because it’s just… so… perfect.) However, there’s been one pretty major question on our minds since we first heard the amazing news of the upcoming revival: How are they going to handle the fact that the original series finale showed the once-inseparable friends estranged and reuniting for the first time while taking their kids to college? Well, now we have our answer.

According to a new feature in Entertainment Weekly, the reboot will pretend like the finale never happened. That’s right — forget about Grace’s daughter, Laila, whom she had with Leo (played by Harry Connick Jr., who will reprise his role in a new way), and Will’s son, Ben, whom he was raising with Vincent (Bobby Cannavale).

Per EW, the revival will return to a universe much like the one we knew and loved for so many years. That means we’ll see Will (Eric McCormack) and Grace (Debra Messing) as single, childless New Yorkers who still live in that fab apartment. As for Jack (Sean Hayes) and Karen (Megan Mullally), he’ll be heading back to his bachelor pad across the hall, and she’ll be popping over from her sprawling mansion, most likely with Rosario in tow.

What a super fun photo shoot. Check out the upcoming issue of @entertainmentweekly on stands this Friday (8/4). @NBCWillAndGrace

“We spent most of our time trying to figure out what would be the way to make the show the best version of itself coming back after 11 years,” executive producer/creator Max Mutchnick explained to EW. “That finale really caused us a lot of grief. You write a finale because a show is over. You never think that it’s coming back again.”

Mullally mirrored his statement in an interview with her costars, saying, “None of us ever thought that we’d be doing the show again, because it’s literally never happened before, so we would have no reason to think, ‘Oh, I’m sure that Will & Grace will just come back one day.” Mullally certainly has a point — reboots are WAY more common these days than ever before.

Come on in. There's plenty of room for everyone. @nbcwillandgrace returns this Fall on @NBC. #WillandGrace

Executive producer/creator David Kohan explained a little bit more about their process when it came to reviving the series, saying, “When the decision was made to bring the series back, we were like, well, we left them with kids, right? And if they have children, then it has to be about them being parents, ‘cause presumably it would be a priority in their lives. And if it wasn’t a priority in their lives, then they’re still parents, they’re just bad parents, right? We frankly did not want to see them being either good parents or bad parents. We wanted them to be Will and Grace.”

While the decision to (in a sense) rewrite time might upset some TV purists, we have to agree that it will be more fun to see Will and Grace (and their quirky besties) return in a way that encompasses all the hilarious awesomeness we loved the first time around.

So, what else is in store for our single and ready-to-mingle lead characters? “They’ve done well with their lives,” says Mutchnick, speaking of Will’s law career and Grace’s interior-design business. “They’ve always been successful at life and living. It’s relationships that Will and Grace have always had the trouble with, and they still do.”

We can’t wait to see how that plays out when Will & Grace returns to NBC on September 28.

What do you think about the decision to pretend like the Will & Grace finale never happened? Let us know @BritandCo!