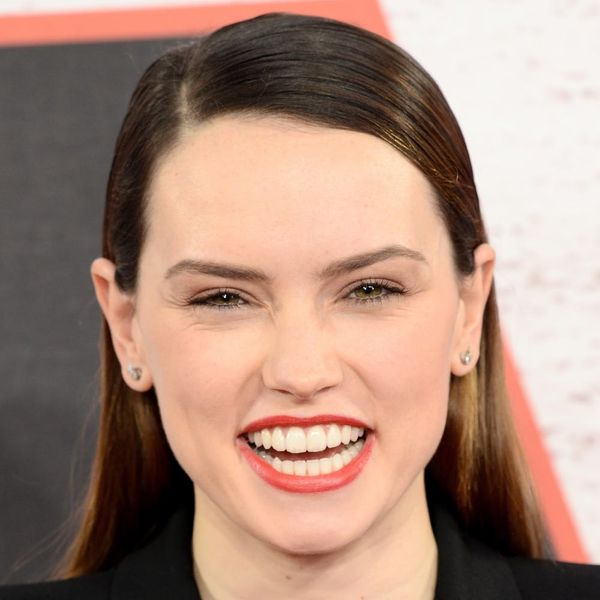 English actress Daisy Ridley has been kicking butt and taking names as Rey in the new Star Wars sequels. The budding style star sparked a wave of interest in triple buns thanks to the epic looks she sports in the films. But now, thanks to a hair makeover, you’d hardly recognize her as the girl who went from scavenger to Jedi.

In the past, the 25-year-old actress has kept her hair on the darker side — usually opting for shades of brown with touches of lighter hues. She even embraced red tresses for a little while in 2016, but that look didn’t last very long. But now it seems she’s ventured into the Light Side of things with a spanking new ‘do. She arrived at the Incredible Women Talk evening featuring Dr. Jane Goodall with a head of freshly colored warm honey blonde hair that had us doing a double take. She wore all black and kept her makeup understated, making her new hue pop.

Ridley’s upcoming film, Chaos Walking, has her star alongside current Spider-Man Tom Holland with a blonde lob and bangs. Though the ‘do appears to be a wig, it’s possible she liked the shade so much she decided to change her actual hair color. Ridley isn’t the only one turning heads with a new hairstyle, however — Bella Thorne recently swapped to black tresses, Zooey Deschanel chopped off her famously long locks, and Ariana Grande fans everywhere lost their minds when she showed up without her signature ponytail. And it’s only February! We can’t wait to see what other new looks 2018 will bring.

What do you think of Daisy Ridley’s new hairdo? Tell us @BritandCo!

Shea Lignitz
Shea can be found in the nearest bookstore or brewery, exploring the great outdoors, or blasting Led Zeppelin. She grew up in the cold and rain of Northern California's redwoods but is currently wandering around Texas.
Celebrity Hair
Beauty News
Celebrity Hair Hair Color hair dye