20 Thoughts We Had During “Star Wars: The Last Jedi” 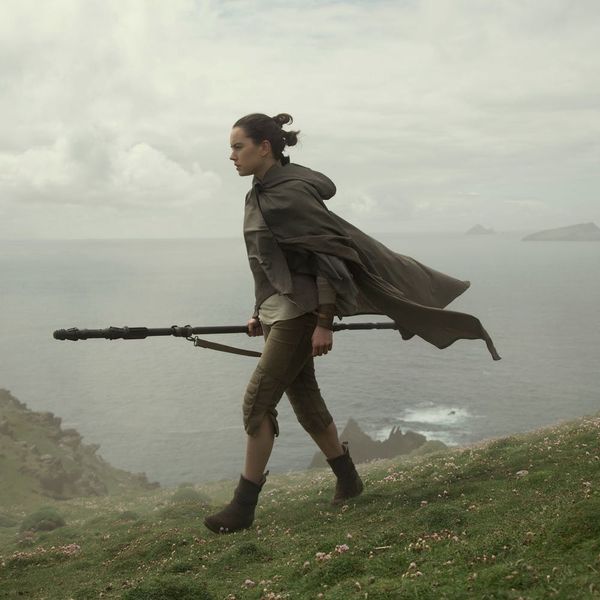 We have thoughts — lots of them — about the newest piece of the Star Wars saga. The Last Jedi, opening everywhere on December 15, made us laugh, gasp, shudder, shriek, and even get a wee bit teary. The film is an exciting addition to the franchise whether you’re either a Star Wars fan (you’ll love it) or not (what?!). Here are 20 initial spoiler-free thoughts, reactions, and observations.

1. We need a Star Wars inspired vacation. Not to a place where X-Wings and TIE Fighters fill the sky, but rather one of the stunning real-world locations featured in the film. For the ambitious project, the cast and crew jetted off to Ireland, Iceland, Croatia, and Bolivia to film various scenes. Personally, we’re partial to the pretty little isle (the very real Skellig Michael in Ireland) that Luke calls home and would take it rain or shine.

2. We want Daisy Ridley’s personal trainer. She continues to be FIERCE especially with a lightsaber in her hand.

3. Two and a half hours goes by quick. This is the longest film in the saga, so make sure you are mentally and physically prepared for the journey and have plenty of food and water.

4. We’re super into Laura Dern’s hair in the movie. It is so on point and could easily be number 26 in our These 25 Purple Hairstyles Will Make You Want to Dye Your Hair piece. The hue, the cut, the styling = perfection.

5. Speaking of hair, Rey’s triple bun is back. And we’re not mad. It’s a look that totally works for her. Although it should be noted, later in the narrative she does sport another style, a far more simple “I’ve been through a whole lot and can’t indulge in being high maintenance,” type of ‘do.

6. Just one more thing about hair; Billie Lourd’s character pulled a mini Princess Leia hairdo yet again. We first saw Carrie Fisher’s daughter don a pair of tiny side buns in Star Wars: The Force Awakens, and she had the same look for The Last Jedi. Billie also paid tribute to her mom via her hair off-screen as well when she sported a braided bun that was very Princess Leia circa Empire Strikes Back at the film’s world premiere.

7. There wasn’t enough Chewy. But yet, there is never enough Chewy. Don’t worry, he will be getting more screen time with the upcoming Solo: A Star Wars Story, the origin story of Han Solo and Chewbacca about their life before joining the Rebellion.

8. We want Rose Tico to be our BFF. Seriously, she is so rad. Not just her character, but the actress, Kelly Maire Tran, IRL. She’s hilarious and adorably nerdy, a perfect combo. It’s hard not to get contact giddiness from looking through her Instagram feed. And check out number 14 below on why else we love her.

9. Every time Rey used the force to move something, we expected her to start bleeding from her nose. Maybe we’ve been watching too much Stranger Things.

10. The “space jewelry” game is strong in this one. From Rose’s moon-shaped necklace to Princess Leia’s finger long rings, to Supreme Leader Snoke’s huge rock ring, there’s a whole lot of otherworldly bling, and this isn’t by accident. Director Rian Johnson revealed on Twitter that, “in rehearsals, Carrie grabbed my arm and told me with great urgency that we needed ‘space jewelry.’ I thought that was a fabulous idea.”

11. We still want a BB-8. But we wouldn’t say no to a BB-9E, the robot’s evil twin that’s spotted assisting the bad guys. You can’t go wrong with a cute round robot.

12. No matter how hard you look, you won’t be able to see Prince William and Harry’s rumored cameo. The dashing duo reportedly wore full Stormtrooper gear and appeared in one of the scenes which may have filmed the day the two famously made a pit stop at the studio outside of London where it was shot. The photo above could be them, or they could be in the crowd of hundred (Tom Hardy supposedly is in Stormtrooper gear in the film too). It’s a royal mystery.

13. We also didn’t find Joseph Gordon Levitt, who reportedly had a cameo in the film as well. He’s a pal of the director and appeared in three of his other films. Levitt’s not on screen, but rather the voice of an alien. “It’s a very brief little thing, but it’s fun, and if you watch the movie, maybe you’ll be able to hear and pick out Joe’s voice in the movie,” revealed director Rian Johnson.

14. We were worried that Porgs would be Jar Jar Binks 2.0., but they’re actually adorable. And we’re not alone in digging these sweet little creatures. “When I look at a Porg, do you know what I think it is? I think it is a manifestation of parts of Rian Johnson’s soul,” Gwendoline Christie said. “And for that reason, I love the Porg. If I hear anyone saying that they’re not into the Porg, I get incredibly defensive. That’s just what I’m projecting. I feel like it’s an element of his soul, and they are beautiful creatures.” She’s not the only fan; Kelly Marie Tran even made her very own Porg costume for Halloween.

15. The movie is non-stop excitement. There are no good “potty break” moments, so use the bathroom before the movie starts. It is a jam-packed show, and you’ll either miss a piece of pivotal action or a great joke.

16. Benicio Del Toro is making a name for himself as a sci-fi character actor. Between Star Wars: The Last Jedi and his role as The Collector in Guardians of the Galaxy, it appears he’s embracing the fantasy genre. One thing’s for sure, he can certainly pull off a sexy scoundrel vibe.

17. There are life lessons. One of the reasons why Star Wars resonates so deeply with so many is that there’s always a message of hope, personal power, and strength. All that and more are in The Last Jedi.

19. Don’t spoil it for your pals. Several times during the movie we had the urge to call our fellow Star Wars fanatic pals and say “OMG, can you believe that __ is __ and that __?” Yeah, don’t do it. Seriously, spoiling movies is not cool, and it’ll get you immediately blocked on Twitter by Mark Hamill himself.

20. You will need time to “process.” This isn’t a film that’s easy to digest; there are mysteries that are seemingly solved and an open-ended conclusion that is a vast as a galaxy. But we have time; we won’t find out what happens until the next one in about two years.

What are you most excited to see in Star Wars: The Last Jedi? Tell us about it @BritandCo!

From Your Site Articles
Sunny Chanel
Sunny Chanel is a freelance writer as well as the founder of the whimsical site Wonder and Company. When this proud San Franciscan isn't writing, working on her fixer-upper or doing crafts, she is playing dress up with daughter and planning her next trip to Disneyland.
Movies
More From Movies