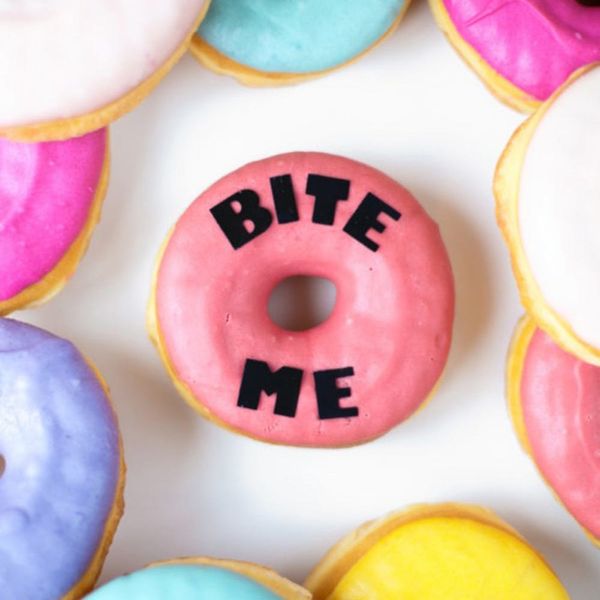 Listen up, PLL fangirls! It’s almost time to find out who A (AKA, AD) is on the seventh and *final season* of the Freeform hit. If you’re ready for a rollercoaster ride full of twists, turns, and the most shocking reveal in Rosewood history, we’ve got everything you need to bring your A-game to your Pretty Little Liars send-off party. From creepy balloons to v scandalous favor ideas, these watch-party essentials will keep your fangirl status alive well after the finale.

Skip the BFF necklace and serve a “necklace” cake all your fellow PLL-obsessed pals will really love. It’s pink, edible, and just the treat you need to get you through the big reveal of AD! (via Aww Sam)

Prints Made With LOVE <em>PLL</em> Mug

Every PLL fangirl needs a mug to add to her weekly coffee rotation. Hand these out as favors and fill ’em with popcorn or candy to really sweeten the deal.

When season seven closed, we saw Spencer get shot by AD and learned Mary Drake just might be her mom. *GASP* Let this printable coloring page help you and your besties remember Spencer in happier times.

Rumors of a baby and a wedding have been floating around this season. We think celebrating these milestones with a cotton candy cocktail is the perfect way to say goodbye to our little liars. (via Kirbie’s Cravings)

Who wouldn’t want to write creepy ransom notes on party balloons? Grab a few magazines, scissors, a glue stick, and mylar balloons, and give AD a run for his (or her) money. Soon enough, you’ll have inflatables that would make the liars cringe. (via Studio DIY)

Make sure your PLL fan club has a pin that gently reminds everyone to “shhh” after commercial breaks. They won’t want to miss a chance to accessorize their denim jacket with this adorable pin.

Whether your guests need a journal to keep their deepest, darkest thoughts or just need something to jot down their grocery list in, their secrets will be safe with this favor.

These DIY graphic donuts are the perfect canvas to recreate the creepy texts from A. (via Studio DIY)

The Little Vinyl Co Kisses from A Decal

Hand out this laptop decal favor to commemorate the end of the Pretty Little Liars era.

No matter what A throws at this mystery-solving crew, their loyalty to one another never waivers. Add a trivia game to the mix and gift a tee to the PLL fangirl who knows it all!

Bring Hanna Marin sass to the party with this hand poured soy candle. It’ll fill the room with Manhattan vibes, sparkle, and a hint of gardenia.
Bianca Lambert
Bianca is an avid traveler, entrepreneur, and stationery designer at Mae B. When this Atlanta native isn't busy being a #girlboss; you can find her curled up with a glass of wine binge watching House Hunters International.
Party Ideas
TV
Party Ideas
More From TV