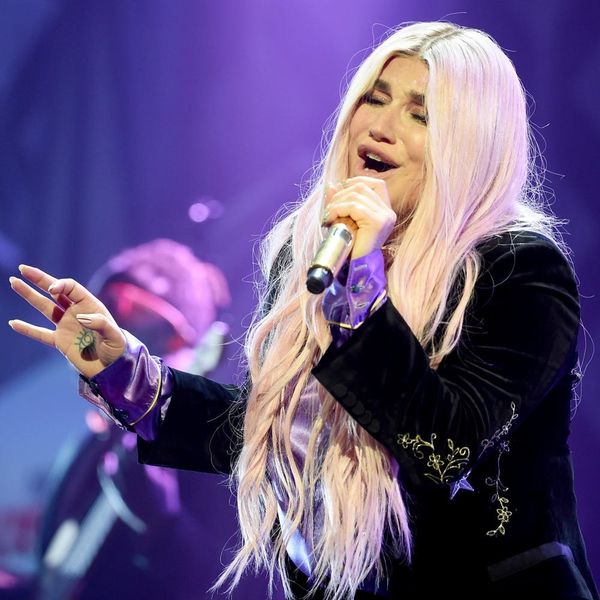 The 2018 Grammys are this Sunday, January 28, and in addition to seeing our favorite stars win the industry's most coveted award, we can expect plenty of stellar performances from some of today's biggest names in the music biz. Click through to see 10 artists we can't wait to see on the Grammys stage. (Photos via Christopher Polk/Getty Images for Coachella + Cooper Neill/Getty Images for iHeartMedia + Nicholas Hunt/Getty Images + Brian Ach/Getty Images for Warner Music Group)
Kesha: Kesha will reportedly perform her moving song "Praying" in response to the current #MeToo movement. (Photo via Cooper Neill/Getty Images for iHeartMedia)
Lady Gaga: Lady Gaga, who's nominated for two Grammys this year, including Best Pop Solo Performance for "Million Reasons," will take the stage to perform a song from Joanne. (Photo via Christopher Polk/Getty Images for Coachella)
Miley Cyrus and Elton John: Miley Cyrus is set to take the stage for a Grammys performance this year, but she won’t be doing it alone. The singer will be stepping up and belting it out with the 2018 President's Merit Award recipient, Elton John. (Photo via Kevin Winter/Getty Images for NARAS)
SZA: SZA took the world by storm last year. Her five Grammy nominations — for Best New Artist, Best R&B Performance, Best R&B Song, Best Urban Contemporary Album, and Best Rap/Sung Collaboration — make her 2018's most-nominated female artist, and we can't wait to see what she'll be bringing to the stage. (Photo via Dia Dipasupil/Getty Images for BET)
Bruno Mars and Cardi B: Bruno Mars (nominated for six Grammys) and Cardi B (nominated for two Grammys) are teaming up to perform their "Finesse" remix. (Photos via Paras Griffin/Getty Images for BET + Brian Ach/Getty Images for Warner Music Group)
Sam Smith: Sam Smith will be delighting fans with a Grammys performance despite the fact that his latest album wasn't eligible for any of the actual awards. (Photo via Kevin Winter/Getty Images for iHeartMedia)
Childish Gambino: Childish Gambino (AKA Donald Glover) is set to perform in his Grammys debut. He's also nominated for five awards. (Photo via Nicholas Hunt/Getty Images)
Alessia Cara, Khalid, and Logic: The trio will be taking the stage alongside suicide attempt and loss survivors chosen by the National Suicide Prevention Lifeline. They'll perform "1-800-273-8255," which is about mental health and was named for the suicide prevention hotline's phone number. (Photo via C Flanigan/Getty Images)
Pink: The "Beautiful Trauma" singer never lets us down with her (often acrobatic) live performances. We can't wait to see what she has in store for us this year. (Photo via Kevin Winter/Getty Images)
Kendrick Lamar: Kendrick Lamar will be opening the 2018 Grammys, which is exciting on its own, but even more so since he'll reportedly be joined by U2 and Dave Chappelle. The buzz, though, is that the Irish band's part will be pre-recorded. (Photo via Paras Griffin/Getty Images)
Desiree O
Desirée O is a ‘Professional Bohemian’ who loves anything and everything related to the arts, entertainment, and pop culture. She ADORES being a ‘Newsy’ for Brit + Co, covering all of the latest tidbits of awesomeness that you want to read about. When she’s not writing, she’s either making messy art, going on long adventurous walks with her camera, or poking around over at bohemianizm (http://www.bohemianizm.com/). You can find out about Desirée O and her work at http://DesireeO.com/ or follow her on Twitter @DesireeO.
Awards Shows
Music
Awards Shows Grammy Awards Music