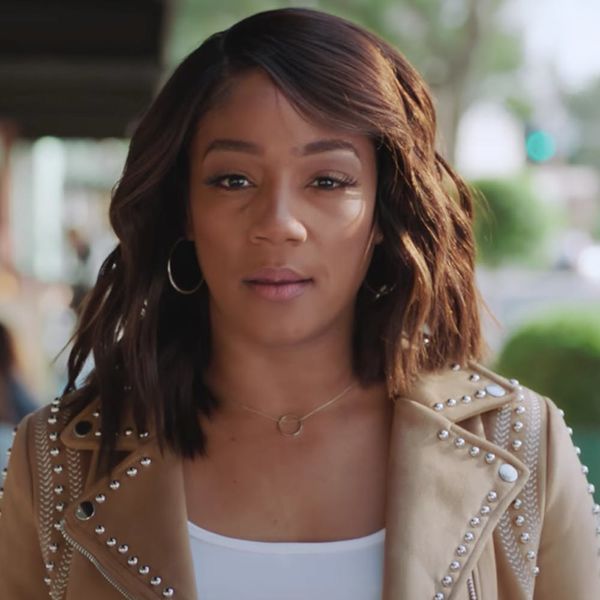 When Super Bowl LII rolls around on February 4, a lot of people will be watching for the game, but a lot of others will be tuning in just for Pink’s National Anthem and Justin Timberlake’s halftime show. And then are those of us who will be waiting for breaks in the action so we can see this year’s lineup of Super Bowl commercials starring Keanu Reeves, Tiffany Haddish, and more celebs.

We’ve already been weirded out four times over by David Schwimmer’s pre-Super Bowl teasers for the Skittles ad that only one person will ever see, but they’re just the tip of the (very big) iceberg of commercials.

1. Squarespace: Sad Keanu returns (with a rather trippy, philosophical lean) in a pair of ads that find him heading into the desert to contemplate life, spend time with his beloved motorcycle, and build himself a snazzy Squarespace website.

2. Groupon: Tiffany Haddish is working with Groupon (a brand she happens to be quite enthusiastic about) to let fans know that every time you use the company’s services, you’re not only helping yourself to some savings, but also doing good in your local neighborhood. The actress’ laugh at the end is pure joy!

3. Pringles: Former Saturday Night Live star Bill Hader introduces us to “flavor stacking,” which is when you layer different flavor combinations of Pringles chips to create an entirely new experience.

4. Febreze: Gotham’s Kieran Mulcare stars in Febreze’s new ad as Dave, a guy whose “bleep don’t stink.” The rest of the commercial shows people talking about the fact that Dave’s “bleep don’t stink,” before reminding us that Dave won’t be at our Super Bowl parties. But other people will be and, well, their bleep might stink, so you should probably have something on hand to deal with it.

5. Budweiser:Budweiser decided to get serious this year, releasing a commercial that shows how the brewer has stepped in to help when needed. “Since 1988, our employees have helped provide more than 79 million cans of water to cities across the US that were impacted by natural disasters,” the description on the video reads. “But there’s more to do. By the end of 2018, our brewery in Fort Collins, Colorado, will be joining our brewery in Cartersville, Georgia, to deliver even more clean drinking water to communities in need.”

6. Doritos: We haven’t seen the finale yet, but Morgan Freeman and Game of Thrones’ Peter Dinklage have been circling each other for a few days in what promises to be one epic rap battle. Missy Elliot and Busta Rhymes are training them for the task.

8. Pepsi: Pepsi gave us a glimpse at how they’ll be paying homage to some of their most iconic Super Bowl ads of all time. Cindy Crawford is returning to the brand after 26 years, this time with her 18-year-old son, Presley Gerber.

What is your favorite Super Bowl commercial of all time? Let us know @BritandCo!

Desiree O
Desirée O is a ‘Professional Bohemian’ who loves anything and everything related to the arts, entertainment, and pop culture. She ADORES being a ‘Newsy’ for Brit + Co, covering all of the latest tidbits of awesomeness that you want to read about. When she’s not writing, she’s either making messy art, going on long adventurous walks with her camera, or poking around over at bohemianizm (http://www.bohemianizm.com/). You can find out about Desirée O and her work at http://DesireeO.com/ or follow her on Twitter @DesireeO.
Super Bowl
TV
Super Bowl
More From TV