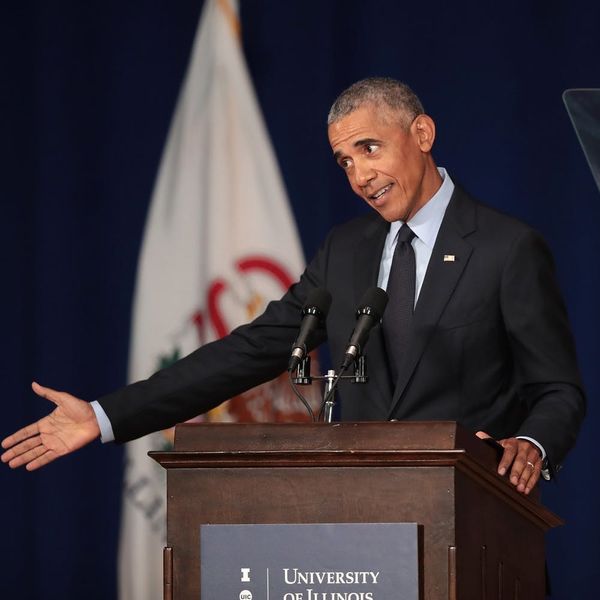 Former President Barack Obama was in rare form today. Yes, he was inspiring as usual during a speech welcoming students to a new semester at the University of Illinois at Urbana, but 44 had another aim and his target was President Donald Trump.

Obama took this moment to get back on the campaign trail encouraging Americans to vote in this year’s midterm elections — and you know he’s not one to get politically involved so much these days — but as he said “these are extraordinary times, and they’re dangerous times.”

In fact, today’s speech marks the first time Obama has even uttered the name “Trump” since leaving office. Let’s just say, it was a memorable moment.

Here are some highlights from President Obama’s incredible speech:

1. “It didn’t start with Donald Trump. He is a symptom not the cause.”

Though it’s easy to blame 45 for the nation’s current political woes, Obama went on to say that President Trump is “just capitalizing on resentments that politicians have been fanning for years — a fear and anger that’s rooted in our past, but it’s also born out of the enormous upheavals that have taken place in your brief lifetimes.”

2. Obama takes on the GOP: “What happened to the Republican Party?”

He said the way the GOP is behaving these days is not conservative at all but instead radical.

“I don’t mean to pretend I’m channelling Abraham Lincoln now, but that’s not what he had in mind, I think, when he helped form the Republican party. It’s not conservative. It sure isn’t normal. It’s radical.”

3. There’s a reason why the economy is doing so well: “Just remember when this recovery started.”

Obama had no qualms about telling the GOP — and Trump — the main reason the economy is strong: because of himself!

“I mention this just so when you hear how great the economy is doing right now, let’s just remember when this recovery started. I’m glad it’s continued, but when you hear about this economic miracle that’s been going on, when the job numbers come out, monthly job numbers and suddenly Republicans are saying it’s a miracle, I have to kind of remind them, actually, those job numbers are the same as they were in 2015 and 2016 and — anyway. I digress.”

4. And how about that New York Times op-ed? “That’s not how our democracy’s supposed to work.”

“And by the way, the claim that everything will turn out okay because there are people inside the White House who secretly aren’t following the president’s orders, that is not a check. I’m being serious here. That’s not how our democracy’s supposed to work. These people aren’t elected. They’re not accountable. They’re not doing us a service by actively promoting 90 percent of the crazy stuff that’s coming out of this white house, and then saying, don’t worry, we’re preventing the other 10 percent. ”

5. “I complained plenty about Fox News, but you never heard me threaten to shut them down.”

Democracy is in danger, Obama said, and that’s why it’m important to vote in the midterms.

“It shouldn’t be Democratic or Republican to say that we don’t threaten the freedom of the press because they say things or publish stories we don’t like. I complained plenty about Fox News, but you never heard me threaten to shut them down or call them enemies of the people.”

6. “We’re supposed to stand up to bullies. Not follow them.”

But the real one-two punch came when Obama said…

Obama ended his speech on a hopeful note saying “common ground is possible” and thinks it’s amazing that more women are running for office. “We need more women in charge,” he said, and added: “one election will not fix everything that needs to be fixed. But it will be a start. And you have to start it. What’s going to fix our democracy is you.”