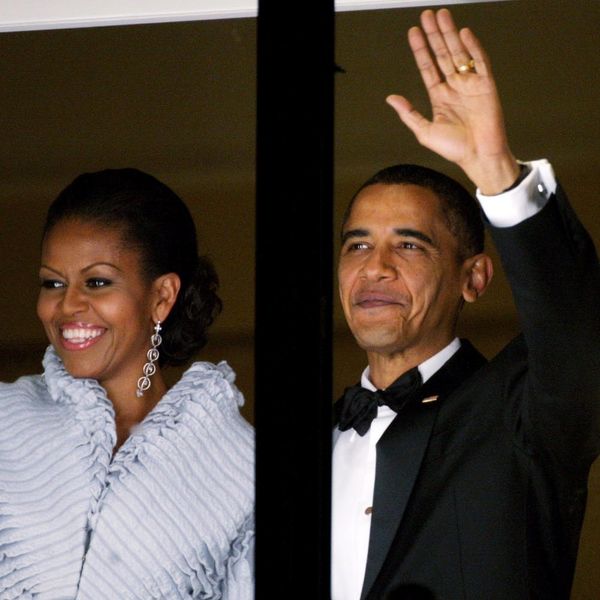 After eight years in the White House, Michelle and Barack Obama deserve a vacation (or three). In January, they golfed in Palm Springs, then jetted off to Necker Island for some kite-surfing. This past month, they’ve been hunkering down in Tahitiwith a few close friends named Oprah Winfrey, Tom Hanks, and Bruce Springsteen. No bigs.

Obviously, they’re taking plenty of vacation photos, and the internet could not be happier. A paparazzi snapshot of the former First Couple basking in the sun is going majorly viral. In the snap, Michelle poses aboard David Geffen’s yacht in the South Pacific, while Barack, capturing the moment, looks every bit the “Instagram Husband,” as one Twitter user put it.

Since the pic was posted with the hilarious caption, it’s been shared nearly 20,000 times (and counting).

Obviously, fans are psyched to see the couple enjoying some time off. But don’t expect their jaunt to last forever. According to Vulture, Barack is working on his White House memoir, while Michelle readies a book project of her own. In the meantime, we’ll be living vicariously through their vacation pics.

What do you think of the Obamas’ second honeymoon? Let us know @BritandCo!

Rachel Davies
Rachel Davies is a writer, curator, and editor. Apart from writing, Rachel loves to read, take Greyhound buses, and drag her friends to museums every weekend. You can find Rachel over on Twitter @rachelcomplains.
Politics
Celebrity News
Politics
More From Celebrity News