This ’90s + Disney Mashup Is the Ultimate Nostalgia Jam 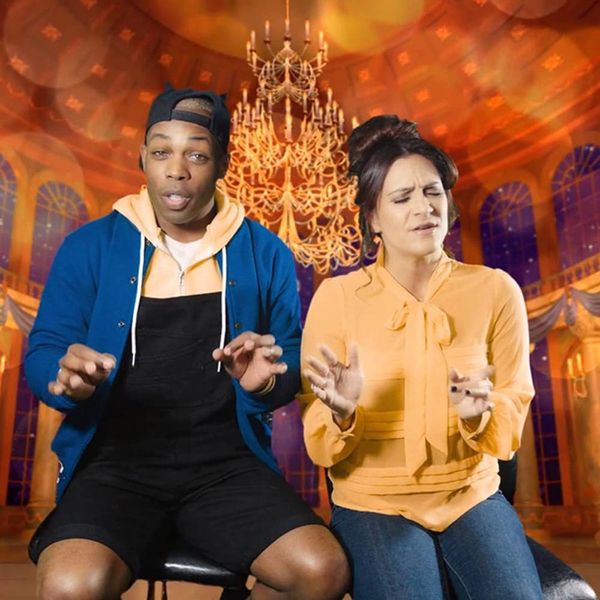 We’ve got two weaknesses when it comes to pop culture moments. Nostalgia and mashups. Exhibit A: Full House re-cut as a horror film. Exhibit B: Movie dance breaks combined into one clip. So when we stumbled upon the double whammy that is the ultimate nostalgia combination — ’90s R+B and Disney — we went a little postal.

Former American Idol finalist and current YouTube sensation Todrick Hall teamed up with singer, songwriter and stage actress Shoshana Bean for a whirlwind tour of ’90s jams and Disney movie soundtrack staples. Never thought about mixing Ginuwine’s “Pony” with the sounds of The Little Mermaid? Or merging Mariah Carey’s early discography with The Lion King‘s “Can You Feel the Love Tonight”? Us either, but now we feel cheated out of the past 20+ years of our music-loving lives because the video is pure magic. Not only does the five-minute Mouse House masterpiece — smartly already on iTunes — meld those classic tunes, but best of all, the duo makes ’90s soiree staple “This Is How We Do It” by Montell Jordan even more of a house party banger by adding some Aladdin. Show us the world, Todrick and Shoshana.

If the singer and dancer looks a little familiar, that’s probably because he is. The super talented guy has previously made the viral video rounds plenty of times before courtesy of his typically Beyoncé or Disney-themed videos or both, like Cinderoncé, the entire Cinderella story as told through QueenBey’s greatest hits. Other vids include the Once Upon a Crime series that’s like if fairy tale characters went on “Judge Judy” and even Mean Gurlz about a redhead who moves from Korea to Compton. Yep, there goes your day.

If you can’t get enough of this clever dude, you’re in luck: he just announced his very own MTV reality show premiering August 31 and he’s kicking off his 23-city Toddlerz Ball tour this June, which we can only assume is one big Disney dance party. Who runs the viral video world? Todrick Hall. And we’re all about it.

Which ’90s Disney song brought you all the feels? Let us know in the comments.