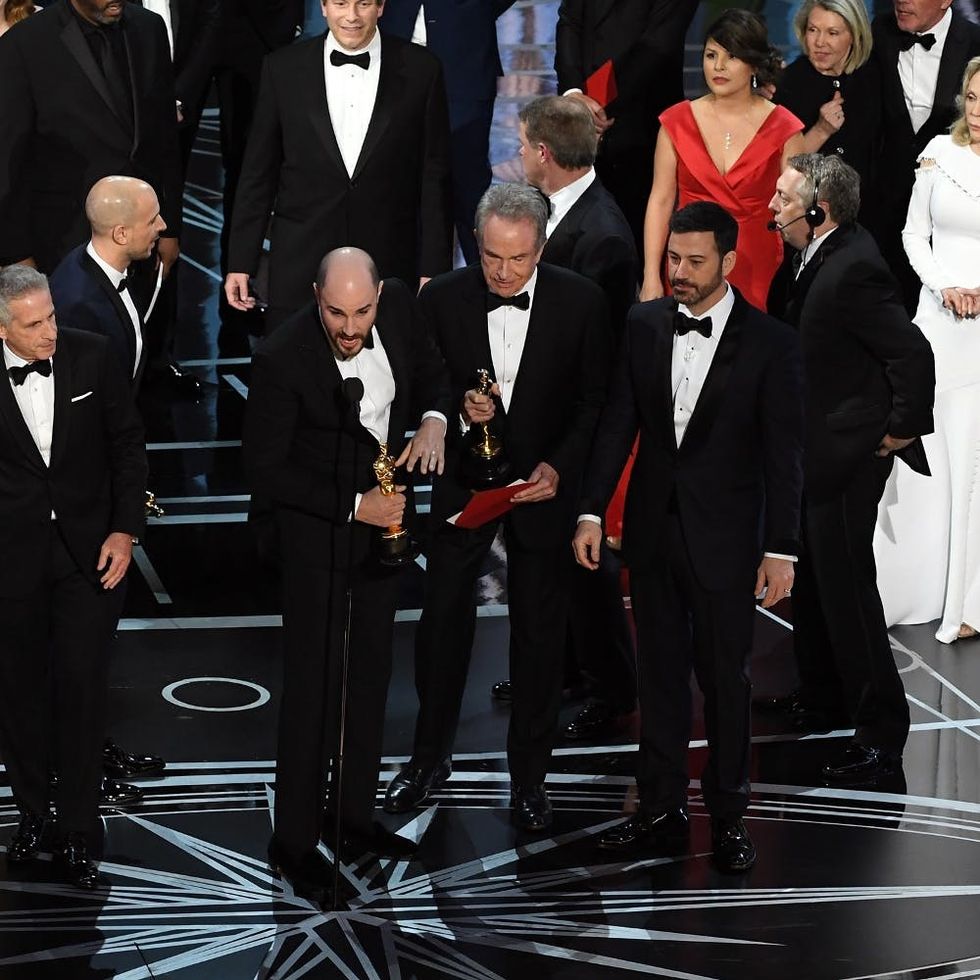 It’s still hard to believe what we witnessed during last night’s Oscars, but it did indeed happen. While folks are still hilariously reacting to the jaw-dropping sitch and going over all of the deets of how it came to be, we’re making it even simpler for you to understand, telling the tale once more through GIF. Check out the ones that perfectly pinpoint every cringe-worthy moment from the incident, below.

…and, upon inspecting its contents, took another peek inside to see if there wasn’t something he had missed.

He hesitated for a rather prolonged period in a state of confusion and/or doubt, which we initially mistook for humor…

…except he wasn’t laughing. Beatty then showed the card to his co-presenter, Faye Dunaway, who announced that the winner was La La Land, even as Beatty is heard saying, “But it says Emma Stone.”

When suddenly, people began to make their way onstage from the shadows of its wings.

La La Land producer Jordan Horowitz figured out what’s going on sooner than most, and announced that Moonlight was the actual winner, while saying, “This isn’t a joke.”

He even grabbed the card from Warren Beatty to show the crowd and cameras the awkward truth.

And there it is, plain as day, for all the world to see: Moonlight.

The Moonlight cast was understandably overwhelmed…

…and began to make their way onstage as Warren Beatty attempted to explain how such a mixup occurred to a crowd that’s abuzz with mixed feelings of disappointment and excitement.

The night ended shortly after, with even Jimmy Kimmel at a loss.

And there you have it, folks: a tale of mixup through GIF! What a wild moment movie fans will NEVER forget.

Does reliving the blinder through GIFs make it better or more cringe-worthy? Let us know @BritandCo!

Desiree O
Desirée O is a ‘Professional Bohemian’ who loves anything and everything related to the arts, entertainment, and pop culture. She ADORES being a ‘Newsy’ for Brit + Co, covering all of the latest tidbits of awesomeness that you want to read about. When she’s not writing, she’s either making messy art, going on long adventurous walks with her camera, or poking around over at bohemianizm (http://www.bohemianizm.com/). You can find out about Desirée O and her work at http://DesireeO.com/ or follow her on Twitter @DesireeO.
Controversy
Pop Culture
ControversyOscars

These Summer Shaving Essentials Will Give You The Softest Skin Ever