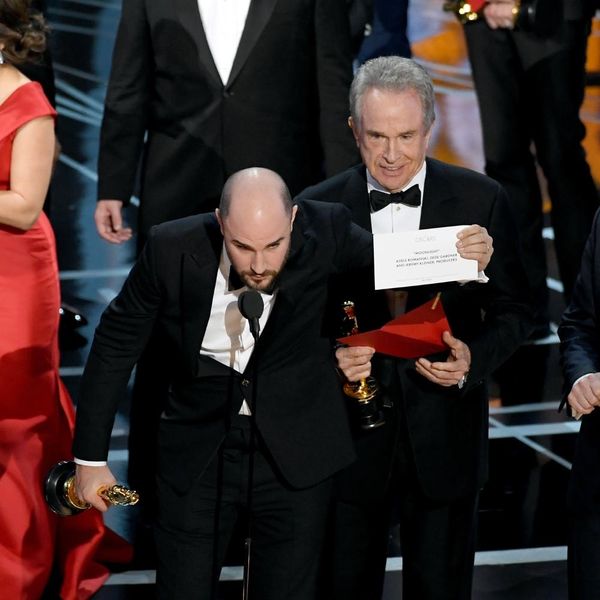 The next time you mess up at work, just remember: Warren Beatty and Faye Dunaway once announced the wrong Best Picture winner at the Oscars. It’s an event that will surely go down as the BIGGEST, most cringe-worthy mistake in showbiz history, managing to trump even Adele’s Grammy win over Beyoncé and that time Steve Harvey announced the wrong Miss Universe. We never would have guessed that such a massive error could happen at an affair as prestigious as the Academy Awards, but, along with a major chunk of the movie-lovin’ world, we all watched it go down live on our screens. While we’re still in a state of shocked disbelief, TBH, we now at least know how the Oscars Best Picture blunder happened.

For those that need a re-cap or missed the flub completely, here’s the cringe-worthy moment in all of its horrifying glory.

Watching the #Oscars producers slowly tell the #LaLaLand team they didn't win Best Picture is WILD. Keep your eyes on the background pic.twitter.com/3TRUWZAMjH

So, how could such a thing possibly occur?!

Apparently, there were a few layers to the story. According to Beatty, who took to the stage to attempt to offer a semblance of an explanation, he had been given a card that read, “Emma Stone, La La Land.” Emma Stone seemingly refuted that claim in her post-Oscars interview (where she graciously lauded the cast of Moonlight) by saying that she was “also holding her Best Actress in a Leading Role card that entire time. So whatever story… I don’t mean to start stuff, but whatever story that was, I had that card. So I’m not sure what happened, and I really wanted to talk to you guys first,” she said to the press.

I love Emma Stone's reaction to the #Oscars blunder pic.twitter.com/TpBRgdDfxf

According to journalist Jarett Wieselman, however, Beatty’s story holds up, as Brian Cullinan of PricewaterhouseCoopers (the accounting firm that tallies the Oscars votes) said that for security purposes, two cards with the winners listed are placed in two different briefcases.

In this case, a MASSIVE mixup occurred, with the wrong envelope being given to Warren Beatty at the moment of the big reveal, containing a card from an entirely different category. The card that Warren Beatty was holding did indeed have Emma Stone’s name on it, with her win for Best Actress in La La Land, which Dunaway ultimately read aloud as Best Picture of La La Land.

A statement from PricewaterhouseCoopers was sent out early this morning via the Academy, taking full responsibility, and saying, “We sincerely apologize to Moonlight, La La Land, Warren Beatty, Faye Dunaway, and Oscar viewers for the error that was made during the award announcement for Best Picture. The presenters had mistakenly been given the wrong category envelope and when discovered, [the error] was immediately corrected. We are currently investigating how this could have happened, and deeply regret that this occurred. We appreciate the grace with which the nominees, the Academy, ABC, and Jimmy Kimmel handled the situation.”

And there you have it, folks: Case (kind of!) closed.

What do you think about the big Oscars blunder? Let us know @BritandCo!

Desiree O
Desirée O is a ‘Professional Bohemian’ who loves anything and everything related to the arts, entertainment, and pop culture. She ADORES being a ‘Newsy’ for Brit + Co, covering all of the latest tidbits of awesomeness that you want to read about. When she’s not writing, she’s either making messy art, going on long adventurous walks with her camera, or poking around over at bohemianizm (http://www.bohemianizm.com/). You can find out about Desirée O and her work at http://DesireeO.com/ or follow her on Twitter @DesireeO.
Oscars
Pop Culture
Oscars
More From Pop Culture