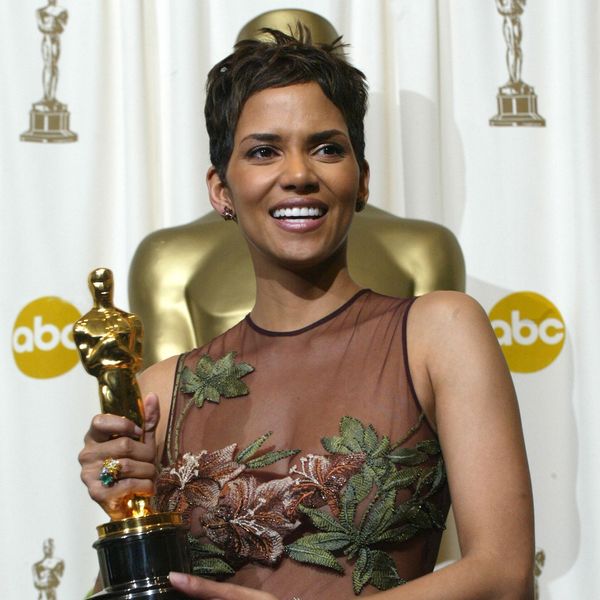 We're all about celebrating incredible women on-screen and off, so the Best Actress race at the Oscars is one of our favorite categories to watch every awards season. This year's nominees — Cynthia Erivo, Scarlett Johansson, Saoirse Ronan, Charlize Theron and Renée Zellweger — join a long list of esteemed performers whose work spans nearly a century. We'll find out soon enough which name will be etched into the 2020 trophy, but in the meantime, here's a look at the Best Actress Academy Award winners of the last 22 years, from Helen Hunt in 1998 to Olivia Colman in 2019.

Olivia Colman, 2019: Colman won her first Oscar last year for her royal performance in The Favourite and we couldn't have loved her acceptance speech more. (Photo via Kathy Hutchins/ Shutterstock)

Emma Stone, 2017: The La La Land star's song-and-dance skills — not to mention her chemistry with costar Ryan Gosling — got the Academy's vote in 2017. (Photo via Frazer Harrison/Getty Images)

Brie Larson, 2016: Larson earned raves (and an Oscar) for her moving performance in the 2015 movie Room. (Photo via Jason Merritt/Getty Images)

Julianne Moore, 2015: After two previous Best Actress nominations for Far From Heaven and The End of the Affair, Moore won the Oscar for Still Alice, in which she played a woman grappling with the devastating effects of early-onset Alzheimer's. (Photo via Jason Merritt/Getty Images)

Meryl Streep, 2012: Streep, who has a record 21 Oscar nominations to her name, has won the Best Actress Academy Award twice, including in 2012, for her portrayal of Margaret Thatcher in The Iron Lady. (Photo via Jason Merritt/Getty Images)

Natalie Portman, 2011: Portman had to go to some pretty dark places for her Oscar-winning turn in 2010's ballet drama Black Swan. (Photo via Jason Merritt/Getty Images)

Sandra Bullock, 2010: Bullock won for her portrayal of Leigh Anne Tuohy in The Blind Side, which was based on the true story of NFL player Michael Oher. (Photo via Jason Merritt/Getty Images)

Kate Winslet, 2009: Winslet has seven Oscar nominations under her belt, including one win for her performance in The Reader, which was based on the 1995 German novel of the same name by Bernhard Schlink. (Photo via Jason Merritt/Getty Images)

Marion Cotillard, 2008: Cotillard, who took home the Oscar for her portrayal of Edith Piaf in La Vie en Rose, is the only French actress to win this category for a French-language performance. (Photo via Vince Bucci/Getty Images)

Helen Mirren, 2007: Mirren was nominated twice for supporting roles — in Gosford Park and The Madness of King George — before she won the Best Actress category for playing Queen Elizabeth II in The Queen. (Photo via Vince Bucci/Getty Images)

Reese Witherspoon, 2006: Witherspoon gave one of the best performances of her career — if not the best — as June Carter in the Johnny Cash biopic Walk the Line. (Photo via Jeff Vespa/WireImage)

Hilary Swank, 2005: Swank's win for her portrayal of an aspiring boxer in Clint Eastwood's Million Dollar Baby was her second victory in this category. (Photo via M. Von Holden/FilmMagic)

Nicole Kidman, 2003: Kidman gave an Oscar-worthy performance as Virginia Woolf in The Hours, which costarred Meryl Streep and Julianne Moore and was based on Michael Cunningham's Pulitzer Prize-winning novel of the same name. (Photo via Frank Micelotta/Getty Images)

Halle Berry, 2002: Thanks to her performance in Monster's Ball, Berry made Oscars history by becoming the first Black woman to win the Academy Award for Best Actress. (Photo via Frederick M. Brown/Getty Images)

Julia Roberts, 2001: Like a lot of other stars on this list, Roberts won for her portrayal of a real person — in this case, Erin Brockovich, a legal clerk-turned-environment activist who helped to build a massive, multimillion-dollar case against California's Pacific Gas and Electric Company in the early '90s. (Photo via Chris Weeks/Getty Images)

Hilary Swank, 2000: Swank won the first of her two Oscars in 2000, for the 1999 movie Boys Don't Cry, which was based on the real-life story of Brandon Teena, a transgender man who was raped and murdered in 1993. (Photo via Kevin Mazur/WireImage)

Helen Hunt, 1998: The 1998 Oscars were largely dominated by Titanic, which came out at the end of 1997, but Hunt and her As Good As It Gets costar Jack Nicholson came out on top in the acting categories. (Photo via Ron Galella/WireImage)