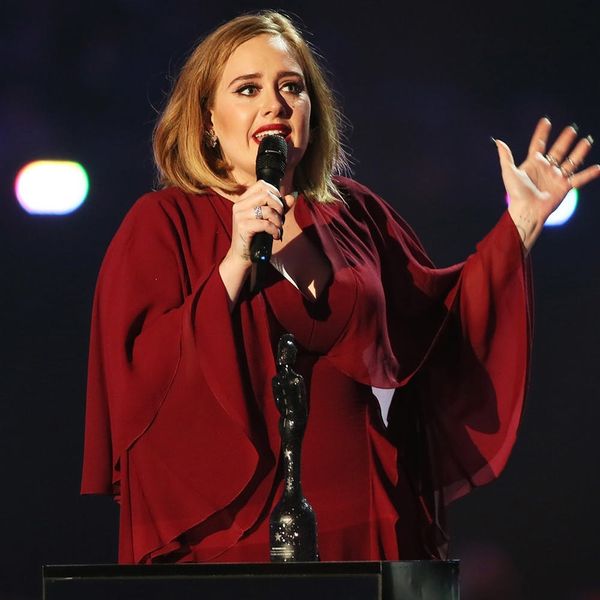 Now don’t get us wrong — we’re big on award shows. The red carpet, the drama, the upsets… But when it comes to acceptance speeches, TBH those can be a bit of a bore. Sure, there are some, like Viola Davis’s empowering Emmys speech and Halle Berry’s teary-eyed best actress win, but for the most part, it’s usually two minutes of names you’ve never heard. However, this year, it seems like that’s all changing. First came Taylor Swift’s epic not-so-subtle statement to Kanye at the Grammys, and now Adele has just used one of her Brit Award wins to publicly support Kesha.

After winning the female solo artist award, Adele concluded her speech by telling the audience, “To the other nominees, it’s an honor to be standing amongst you. You’re all incredible. You’re all amazing and it’s a privilege to be alongside you. I’d like to take a quick second to thank my management and my record label for embracing the fact that I’m a woman and being encouraged by it. And I’d also like to take this moment to publicly support Kesha.”

To clear up the common denominator here, Adele is currently the most profitable artist signed to Sony, the same label Kesha is currently under contract with. Given the circumstances of Kesha’s case, Sony has been receiving a lot of backlash as of late for not allowing Kesha out of her contract under her alleged abuser Dr. Luke.

Adele is only the most recent of a number of celebs who have taken to social media to make their support for Kesha known. In addition to people like Reese Witherspoon, Anne Hathaway and Jaime King sharing Stefania Tejada’s illustration of the pop star, Taylor Swift has also donated a quarter of a million dollars to help Kesha fund her ongoing legal battle.

Cortney Clift
Cortney is the senior writer and special projects editor at Brit + Co. She typically covers topics related to women's issues, politics, and lifestyle. When she's not buried behind her computer you'll find her exploring New York City or planning her next big adventure.
Feminism
Pop Culture
Feminism