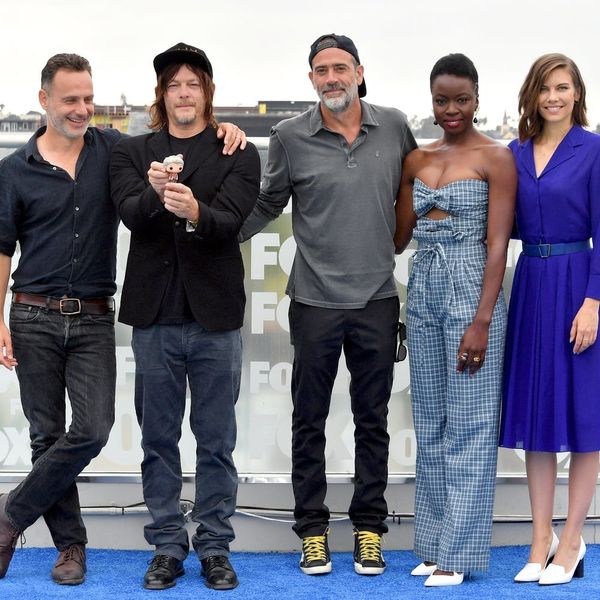 We’ve had to say goodbye to a lot of beloved characters on The Walking Dead, but it still hurts every time. And the show’s latest exit is a big one. Andrew Lincoln officially announced on Friday, July 20, that he’s leaving the series after the upcoming season.

Variety TV reporter Joe Otterson tweeted a pair of videos showing the star speaking to the audience at San Diego Comic-Con. “Now, I did a zombie poll two weeks ago and there were 200 zombies,” the actor jokingly told the crowd. “I asked them, I said, ‘I’m probably going to get asked a question. Do I confirm or do I deny?'”

He chose the former, saying, “This will be my last season playing the part of Rick Grimes.”

The crowd was obviously disappointed, but Lincoln had more to say. “Now, hear me out, please, please,” he requested. “I love this show. It means everything to me. I love the people who make this show. I promise not to cry — I’ve done enough crying on screen. I also am particularly fond of the people who watch the show. You people. And this has been the most extraordinary, amazing, and beautiful experience of my career, largely because of you guys.”

In the second clip Otterson tweeted, the actor added that his “relationship with Mr. Grimes is far from over,” even if his exit is imminent. “A large part of me will always be a machete-wielding, Stetson-wearing, zombie-slaying Sheriff’s deputy… from London, England,” he joked.

He further assured fans that the best is yet to come and that two of the upcoming episodes are his favorite episodes since the pilot. “I also just want to commend all of these amazing actors and the rest of the cast,” he continued. “I think they’re doing the greatest work I’ve ever seen.”

Lincoln’s exit from the series follows the departure of Chandler Riggs, who played Rick Grimes’ son, Carl. Both actors started on the show when it premiered in 2010.

What do you think about the fact that Andrew Lincoln is leaving The Walking Dead? Let us know @BritandCo!