This Pageant Queen Uses Her Platform to Fight for Indigenous Rights 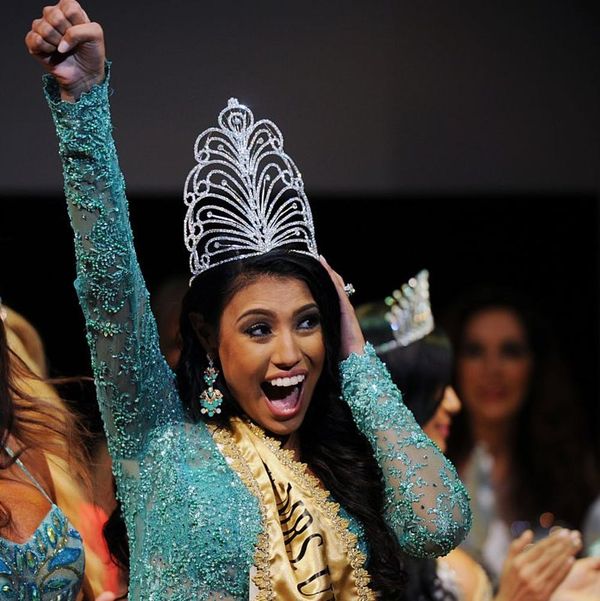 “I thought, ‘This is the perfect time for people to listen and to shock people,’” she says.

From the moment she became the first Indigenous person to win the title of Mrs. Universe in 2015, Callingbull has used her public platform to bring attention to the treatment of Indigenous people in her native Canada and elsewhere, in any way she can. From her perspective, politics and pageantry go well together. And, after winning the big crown, she knew she had to seize the moment.

Callingbull’s first political action post-pageant was that now-famous 2015 interview, on CBC’s Power & Politics, in which she criticized the Canadian government’s inaction on Indigenous issues. “I believe that this government was created to work against us and not for us,” she said.

She added: “With the bills that have been passed, we are being treated like terrorists if we’re fighting for our land and our water.”

While many people praised Callingbull for speaking out, others complained that her political activism had no place in the world of pageants.

Similar to the challenges faced by Native Americans in the US, APTN reports that Indigenous populations in Canada face disproportionate levels of poverty, obstacles to quality education, disparate access to quality health care, and frequently bear the brunt of resource extraction.

Callingbull knows these harsh realities firsthand. Her hard upbringing led her to become involved with charity work and politics beginning in her teen years, back on the Enoch Cree First Nation in Central Alberta, Canada.

“Growing up, I lived in poverty and I lived through abuse, so I know what it’s like to have nothing and to feel like nothing, and feel like I’m not going to go anywhere with my life,” she says. “I worked really hard to get where I am now, and there’s no point in giving up because if I can live through everything I’ve lived through, I can live through anything… and just being fearless every day helps me accomplish a lot.”

Knowing the challenges of being an Indigenous young person is integral to Callingbull’s work as a mentor, public speaker, and workshop facilitator across the country.

“A lot of [Indigenous] youth say that they don’t feel like they’re being acknowledged or represented by the government. A lot of them say that the government doesn’t care about us because the system failed us,” she says.

Callingbull wants these young people to feel heard, understood, and empowered, through her visibility in politics and entertainment and through their own dreams and hard work. She regularly profiles young Indigenous women in FLARE who are making waves in creative and business fields. She’s also a public speaker, youth mentor and television actor, and was part of a First Nations team (with her dad) on The Amazing Race Canada.

Callingbull tries to lead by example, breaking stereotypes about Indigenous women in media and entertainment. “As an actor, I know it’s so hard to get roles because I’m Native,” she says. “It makes me really proud to be [part of] the first Native team on The Amazing Race Canada, and the first Native Mrs. Universe. It’s definitely a huge accomplishment for me because I’m able to represent Indigenous people on the mainstream level,” she says. “We need more people — more representation. Positive representation.”

Going forward, she wants to work with more at-risk Indigenous youth to help them build confidence and find their voice. “I’m young and a lot of youth find it easier to talk to me and to open up to me during my workshops,” she says. “They fear that their voice isn’t going to be enough. But having a voice is a very powerful thing. And I like to tell them that, because look at what happened to me.”

Tell us how you found (or are finding) your voice on Twitter @BritandCo.