You Can Actually *Hear* These New Sound Wave Tattoos 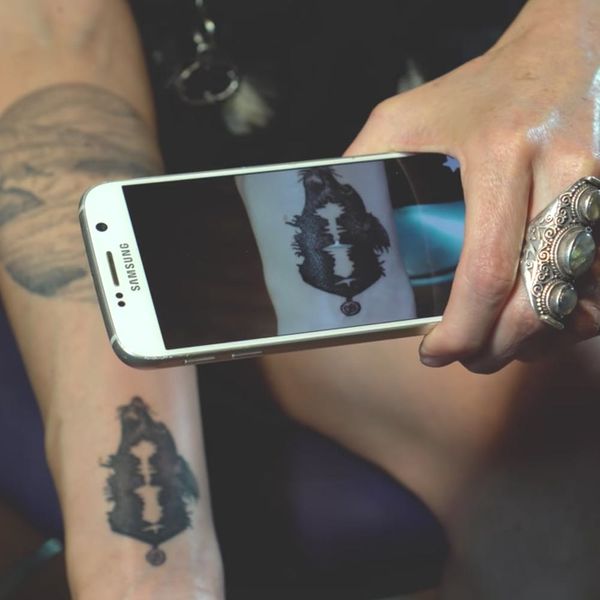 While celebs are always making waves with their new ink (we’re looking at you, Demi Lovato!), there’s a new trend in tattooing that actually INCLUDES sound waves. And they aren’t just cool looking — you can actually *hear* them.

Nate Siggard, the founder of a new company called Skin Motion, has reportedly created sound wave tattoos that, when combined with an app, can play audio. The idea came to Siggard after a customer requested the first line from Elton John’s hit “Tiny Dancer.” Siggard’s girlfriend, Juliana, asked, “Wouldn’t it be cool if you could listen to the tattoo?” So he decided to try it. He recorded Juliana and their four-month-old daughter’s voices saying, “I love you.” From there, he found a way to pair the resulting sound wave piece with playback technology.

The process begins when you upload a sound clip into an app, then purchase the coordinating Soundwave Tattoo. As you may have guessed, it’s a somewhat specialized procedure, requiring the artwork to be applied by a certified Skin Motion artist.

Then, after you’re inked, you can listen to the clip any time you want by pulling up the app (which is yet to be released to the public!) and holding your phone over the design.

Skeptics question whether Siggard’s invention is real, saying there’s no way a sound wave could be tattooed with enough precision to produce clear sound. Others have likened it to a QR code, with the sound clip stored in a database to be called upon whenever the app is opened.

Either way, it’s definitely cool to be able to connect sound to something that has, until now, been merely visual.

What sound would you get tattooed? Tell us @BritandCo!

Shea Lignitz
Shea can be found in the nearest bookstore or brewery, exploring the great outdoors, or blasting Led Zeppelin. She grew up in the cold and rain of Northern California's redwoods but is currently wandering around Texas.
Tattoos
Tattoos
Tattoos Tech News
More From Tattoos