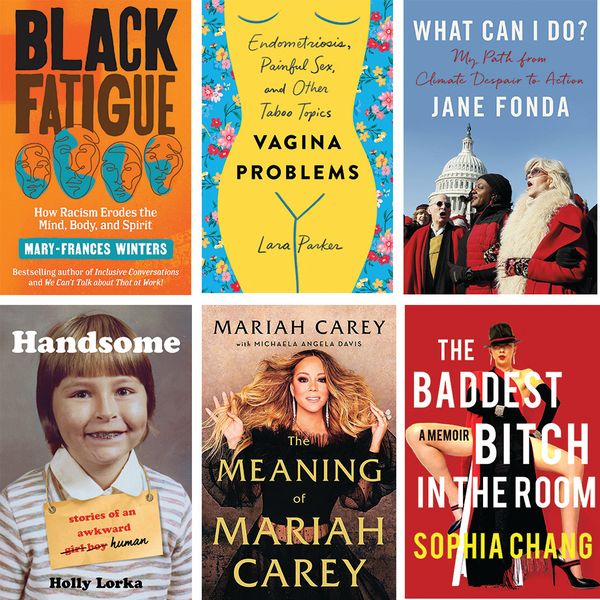 Bring on some new inspiration this fall with these must-read memoirs. Get personal with the authors, from celebrity figures to inspiring activists to those who have overcome significant trauma, and get a new perspective on the world and the human experience. Now get cozy and read on...

After a lifetime of searching for courage and clarity, Mariah Carey finally shares her journey as a child, singer, songwriter, producer, actress, and mother. Although she lived a public personal life, Carey shares the stories that were impossible to put in any single magazine article. She dives deep into her youth and gives her younger self a voice and lets the triumphant woman she has become share her unfiltered experience. Read to see the Mariah beyond the music, and follow her humbling story about the human spirit.

Gone: A Memoir of Love, Body, and Taking Back My Life by Linda Olson

Linda and her husband Dave were two young doctors living the dream. However, their perfect lives and Linda's body were shattered when a train hit their van while they were vacationing in Germany. Despite Linda becoming a triple amputee they stay together and work to rebuild their lives. She soon learned how to walk with prosthetics, finish med school while pregnant, and change a diaper with one hand. Gone is a story about turning challenges into opportunities and steering your life in the direction you want.

Everything Beautiful In Its Time: Seasons of Love and Loss by Jenna Bush Hager

To their granddaughter, George and Barbara Bush were so much more than the president and first lady. They were her beloved grandparents who taught her about love, strength, humility, and countless other life lessons that continue to guide her life. Her maternal grandparents, the Welches, may not have held as much national fame as the Bushes, but to Jenna, they were equally loved as they taught her to appreciate the little things. Throughout her book, Jenna pays tribute to her past and provides life lessons for all readers to take with them.

I Have Something to Tell You: A Memoir by Chasten Buttigieg

Once just a teacher in South Bend Indiana, Chasten Buttigieg is now a figure on a national level after his husband Pete's groundbreaking presidential campaign. In his memoir, follow the emotional journey that Chasten took before becoming the man people know him as today. He writes about the struggle to find acceptance as a gay man, feeling different, his coming out story, and how he met the boyfriend who would later become a major political figure. Chasten's memoir relays his honest experience finding love and loving himself while inspiring others to do the same.

There I Am by Ruthie Lindsey

At 17 years old, Lindsey is hit by an ambulance and given a five percent chance of survival. One month later after a spinal fusion surgery, Ruthie beats the odds and leaves the hospital on her own two feet. Then she begins to experience debilitating pain a few years later. As her life unravels, Ruthie returns home to Louisiana to find a way to learn joy again. In a recent Creative Crushin', Brit + Co cofounder Anjelika Temple talks with the author Ruthie Lindsey about her creative process, what motivates her, and what inspired her to share her story of healing with the world.

Hilariously raunchy yet equally heartfelt, Handsome follows Holly Lorka through the first fifty years of life, searching for love and answers to questions about sexuality. As a child in the 1970s, Lorka wondered why God put her in the wrong body and made her like girls. She thought she was a monster and shares her awkward struggles to find sex and acceptance. Laugh with Lorka as she describes wondering why she didn't have a penis and feel for her through her candid discussion of what it means to be nonconforming to society's standards.

What Can I Do?: My Path from Climate Despair to Action By Jane Fonda

Jane Fonda is a two-time Oscar winner and an Emmy award-winning actress, but she is also widely known for her activism. In her new memoir, she shares her tireless fight against climate change and the stories behind her weekly demonstrations that began in the fall of 2019. Her book is a call to action that urges readers to take on the moral responsibility to fight police violence against African Americans, fracking, misogyny, and record-high numbers of greenhouse gasses. All of Fonda's net proceeds will be donated to Greenpeace.

Black Fatigue: How Racism Erodes the Mind, Body and Spirit by Mary-Frances Winters

As the author of the first book that uncovers Black fatigue, Winters hopes to inspire activism amongst all who learn of this dire consequence. Black Fatigue is the physical and emotional toll that systematic racism takes on generations of Black people. Winters shares how young and old Black people, in every aspect of life, are drained after years upon years of experience with racial inequities. She hopes to finally teach activists that systematic racism is literally tearing apart the races it targets.

After years of shame, stigmatization, and fighting a medical community biased against females, Lara Parker, Deputy Editorial Director at Buzzfeed, was finally diagnosed with her vagina problems. Parker is unafraid to let the world know that she has endometriosis, pelvic floor dysfunction, and other debilitating conditions that prevent her from having sex. Through candid stories about anxiety and depression over the pain and discomfort her conditions have caused, Parker is determined to help the one in ten women like her to live their best lives.

The Art of Losing It: A Memoir by Rosemary Keevil

After losing her husband to cancer and her brother to AIDS in the same year, Rosemary Keevil spirals into addiction while struggling to cope with her grief. She enters rehab desperate to be there for her two young daughters who just lost their dad. What follows is a fresh wave of chaos rather than the peace she and her daughters need. Hopeful and heartwrenching, The Art of Losing It shares the journey to overcome hardship and emerge on the other side with strength.

The Baddest Bitch in the Room: A Memoir by Sophia Chang

Once a simple daughter of Korean Immigrants, Sophia Chang fearlessly pursued her dreams and made a name for herself as one of the most powerful women of color in the hip-hop industry. After moving to New York from Vancouver, Chang met Prince Rakeem, the founder of the Wu-Tang Clan and embarked on a dramatic journey of monks, motherhood, Kung Fu, and fighting societal norms. After years of helping men voice their stories, Chang is finally taking her power to the pages and sharing her own.

Activist, philanthropist, and New York Times bestselling author, Glennon Doyle teach us all what it means to untame ourselves and live authentically. Learn why it's important to embrace anger, a new perspective on guilt, and concrete tips on how to feel your feelings - even when it's uncomfortable. Doyle talks with Brit Morin and Anjelika Temple in a recent Teach Me Something New! podcast about tapping more deeply into your intuition, reach your authentic self and reclaiming your identity, free from the confines of a traditionally patriarchal society.

What are you reading this fall? Share with us @BritandCo!

12 Easy Last-Minute Halloween DIYs You Can Make This Weekend