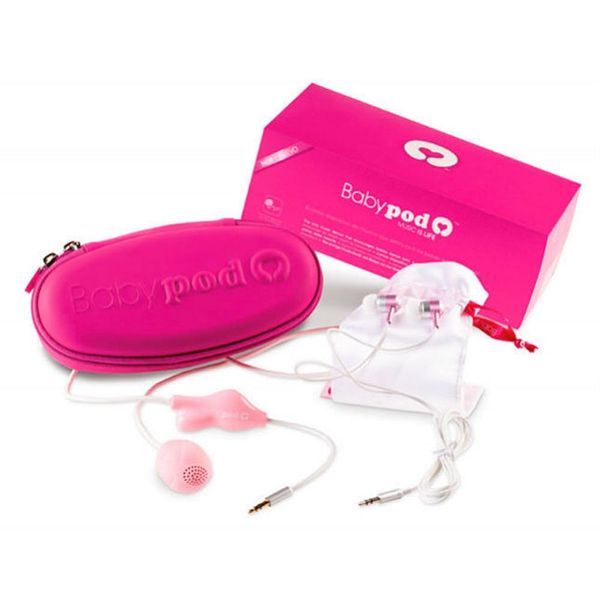 Pediatricians often recommend that kiddos grow up with as many stimuli as parents can muster, and music is a BIG one. But why wait until your little one grows up to foster his or her love for the universal language when you can start even before birth? Sound impossible? It’s not if you use Babypod, the only fetal speaker around that stimulates the vocalization and neural development of babies-to-be when worn by pregnant moms-to-be! Yes, this is the craziest pregnancy gadget you’ve seen yet.

Babypod was conceived (get it?) after research emerged from Institut Marquès on the positive effects of listening to music in early life, especially on memory skills and brain development later in life. During their research into fetal hearing and improved sound delivery to fetuses, the study team designed an intravaginal device, that, when used by pregnant women, was actually found to stimulate unborn babies — even causing them to respond by moving their mouths and tongues in ultrasound scans! That’s right, this device will make your unborn child LIPSYNC.

Inspired by this scientific breakthrough, the team at Babypod developed their eponymous medical device for future generations of pregnant women and their unborn babies to rock out to!

Stimulating little ones through the Babypod is intended to be easy and painless. Moms-to-be can simply insert the free end of the Babypod like a tampon, and then connect the jack plug of the device into a smartphone. If you want to bust a move to the same tunes your baby is listening to, just plug your headphones into the second audio input on the top of the connector! When you’re done jamming, gently pull on the connection cord to remove the Babypod. You can easily clean the device when closed using only mild soap and water. Then, store it in a dry place for your baby’s next streaming session!

You might be wondering how the Babypod works, or if babies can even hear! Science shows that babies can perceive sound, but music played at the abdominal level from a headphone around the stomach doesn’t tend to reach the fetus. This is because the abdominal wall acts as a sound barrier that can muffle and degrade sound delivery. As an intravaginal speaker tested and approved by the Institut Marquès, the Babypod reduces the number of layers separating the baby from the sound target so that your little one detects sounds with the same clarity as when they were initially transmitted! Babypod even makes the claim that sound emitted from their device, at an intensity of 54 decibels, is equal to the volume of ambient music or a conversation in hushed tones. By stimulating babies through these gentle sounds, the Babypod can encourage their response and vocalization while still in the womb!

Babypod claims that it’s generally safe for use by moms with healthy pregnancies, and that with no battery, Bluetooth or radio frequency involved, it doesn’t pose adverse effects to the fetus itself. According to Institut Marquès’ clinical study, the first 100 children born after using Babypod yielded normal results from otoacoustic emission studies. If you want to snag a Babypod for the future little one in your life, head over to their website and order form. The device is around $134 USD and available now.

Moms-to-be, what are your must-have pregnancy gadgets? What is the wackiest thing you’ve ever heard of? Tweet us @BritandCo!

Manasa Reddigari
Manasa is a freelance writer with a passion for the weird and wonderful technologies that are transforming life as we know it today.
New Moms
Tech
New Moms New Parents Parenting Pregnancy