Bad News: You’re Probably at Risk for Adrenal Fatigue. Here’s How to Fix It 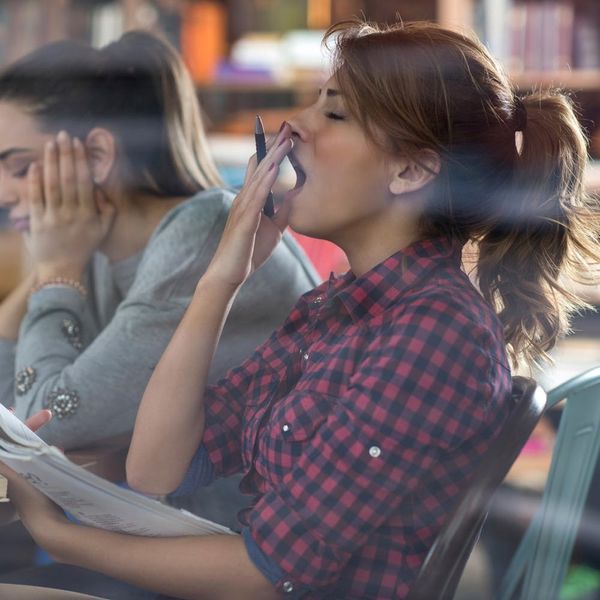 When you’re fresh out of college and tackling your first job, it’s easy to get wrapped up in a lifestyle of going, doing and rushing — not to mention partying late and drinking ever-increasing amounts of coffee every morning. You might be hitting snooze on the regular, which seems normal, but could it be a sign of something worse?

It turns out millennials are at risk of exhaustion, aka “adrenal fatigue.” Officially known as “adrenal insufficiency,” this condition refers to a collection of symptoms, starting with chronic fatigue. Your adrenal glands are located above the kidneys — they’re no bigger than a couple of walnuts — but they play a huge role in your body’s ability to manage stress. Drinking coffee every day? You’re increasing your adrenal response. Dealing with lots of stress? You’re making them work again. Staying out late and sleeping at odd hours? You get the idea. Your extreme level of tiredness can weaken your entire immune system and set you up for all sorts of other problems.

Enter Marjorie Ordene, MD, a Brooklyn-based doctor who helps patients tackle their wellness and recover from adrenal burnout. I reached out to her to get some more information.

Why You’re at Risk for Adrenal Fatigue

According to Dr. Ordene, “Lack of sleep, burning the candle at both ends and overstimulation with caffeine” are all tell-tale risk factors that could lead to adrenal burnout. For recent college grads especially, she added: “A lack of regular hours, excessive caffeine and no rest from cell phones can really play a role here. A constant barrage of overstimulation from computers, Internet and loud music keeps millennials from getting the proper rest.” Hey, even the hugely successful Ariana Huffington, creator of the Huffington Post, has been speaking out against our culture of sleep deprivation.

That draining relationship you always seem to be complaining about could also be a trigger for your body to produce adrenaline and other stress-management hormones. If it’s not helping you to feel great and relax easily in your life, you should probably get rid of it. That include clutter, ex-boyfriends, complaints and drama… whatever.

Dr. Ordene pointed to “difficulty getting out of bed in the morning” as an indicator of adrenal imbalance. But it escalates quickly. An “inability to maintain calm” is a bad sign. Even young people can have palpitations, panic and anxiety in their everyday lives at a level that is alarming for their age. Top that with poor sleep and a lack of “centering,” and you’ve got a recipe for disaster for your health energy levels.

In order to test your fatigue levels, doctors will measure your cortisol production, the hormone produced in stressful situations, at various times of the day. In the Kalish Method, designed by Dr. Daniel Kalish for treating adrenal fatigue, for example, there are three stages of stress. In stage one, the rush of pushing toward a goal, dancing all night, exercising often, having coffee, etc., might make someone feel “activated” and excited. This is the “good stress” that we thrive on. But by stage two, the cortisol level starts to fail.

Dr. Kalish tells us, “This is when people start to gain weight. This is when people start to not be able to sleep. This is when your sex drive starts to go away. People just know that there’s some health problem.” Stage three is adrenal burnout, chronically low cortisol levels and the sense that it’s impossible to feel truly rested. Dr. Kalish has had 12 and 13-year-old girls in his practice that have had adrenal burnout. It’s shocking but true — so maybe it’s not your fault you’re tired. Blame the system.

If you find yourself addicted to caffeine, going to bed late every night, and having a hard time waking every morning, there is hope. Dr. Ordene recommends that young people experiencing these symptoms do the following: “Wean off caffeine, and go to bed 15 minutes earlier each night or each few days until you get on a better schedule.”

In addition to these lifestyle habits, you can take adrenal gland supplements or get positive cranio-sacral stimulation to lower anxiety and help regulate hormones. No kidding, you can even wear this funny looking device called a “Fisher Wallace Stimulator.” You can also try yoga, deep breathing and meditation too. In other words, you don’t have to lay around all day, but you DO gotta get your rest and relaxation.

When I inquired about where to start testing for elevated stress and adrenal levels, Dr. Ordene pointed to tests for adrenal cortisol levels, including salivary hormone testing, and tests for your DHEAS levels. If you’re feeling run down and worried you’re in the initial stages of this condition, her recommendations are: “Avoid caffeine. You also want to cut back on added sugars and alcohol, then common food allergens, especially wheat, perhaps gluten and food additives. Eat small, frequent meals with a good balance of protein, fat and carbs, healthy fats.”

It’s no surprise that for the good of your health and body, less really is more.

Are you cutting back on caffeine or joining team #GoodNightsSleep? Give us a shout on Twitter @BritandCo and let us know!

Exenia Rocco
Exenia is a contributor at Brit + Co. When she's not writing witty articles, she can be found singing, dancing, or traveling. She considers herself a digital nomad and a fun-loving artistic soul.
Healthy Living
Health
Healthy Living Sleep