9 Secrets Behind the Hairstyles of ‘Black Panther’ 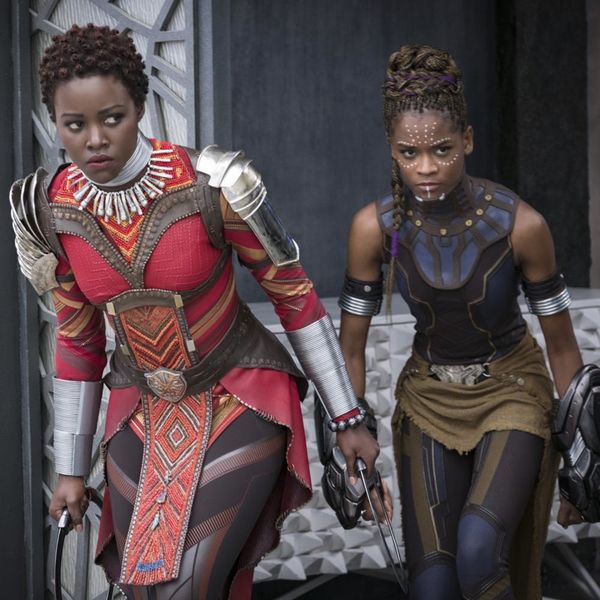 A week after breaking all kinds of box office records, Marvel’s Black Panther shows no signs of slowing down and the love for Wakanda is still going strong. It’s going to be a while before we stop talking about the epic levels of dopeness this movie has brought us — and this most certainly includes the statement-making hair and makeup choices for the film’s main ladies. Black Panther‘s lead hairstylist, Camille Friend, shares some details about what went into crafting three of the movie’s most iconic hairstyles.

1. Nakia’s “Wakanda Knots” is a wig. And a damn good one because she totally had us fooled. It was customized so meticulously that fans and actors thought it looked just like Lupita Nyong’o’s natural hair. Don’t get it twisted (see what we did there?) — this isn’t just some tszujed-up version of a store-bought wig. First, a mold of Nyong’o’s head was taken and then a wigmaker hand-wove textured hair pieces onto a base. With the help of what Friend refers to as “HD lace” — a high-grade, ultra-fine net for wigs — the hairline is virtually seamless.

2. These are not Bantu knots. Friend coined them “Wakanda Knots.” Traditional Bantus are more defined and conical, whereas these styles were made to almost look like little mushroom tops. After setting hair with a foaming pomade, Friend used the tip of a comb to puff out each twist.

3. Hair parts were intentionally blurred. When crafting a style for the big screen you don’t want to create too much of a distraction for viewers. “I took the comb and blurred the lines of the parts. You can also take a dark brown eyeshadow and go over the parts so that they are not so obvious on camera,” explains Friend.

4. Shuri’s royal braids took several tries to perfect. “Ryan Coogler [Black Panther director and writer] said that he wanted us to be able to change her hair [style] all the time,” says Friend. So after trying a number of different braided looks, Friend settled on versatile micro braids, which she could style as if they were individual hairs.

5. Upkeep was essential. Actress Letitia Wright, who played Shuri, had her braids refreshed every two weeks. “We re-braided the front every two weeks since that’s where you see the wear and tear. The interior was redone every four to six weeks to maintain the look,” Friend notes.

6. Arts and crafts accessorizing made all the difference. In addition to the intricate braid-on-braid styling of Wright’s hair, if you look closely you’ll see that her braids were also accented using pieces of purple thread and leather that were sourced from a craft store.

7. Each of Ramonda’s platinum locs were hand-rolled. Angela Bassett’s wig was done in a two-step process. First, the wigmaker created the base and then another company hand-rolled and inserted about 110 locs into the base. “This style required about four or five different hair colors that we blended together to make it look natural and authentic,” Friend says.

8. IRL a platinum loc wig would cost about $15K. Even with all of the high-tech advances in hair slayage, the process of making a wig this custom is still very tedious and traditional. Each hair is tied into the base strand by strand. “A custom-made wig like this would cost anywhere from $8K up to $15K, depending on the texture and color,” Friend says.

9. Wig doubles were very important. “We have what we call a hero wig,” explains Friend, but since you never know what’s going to happen on set, there’s always a backup. “You don’t want to stop production because a wig has been ripped,” Friend jokes. Duplicates are also made for stunt doubles. So basically we’re talking about $45K to make wigs just for one character. That’s a lot of vibranium.