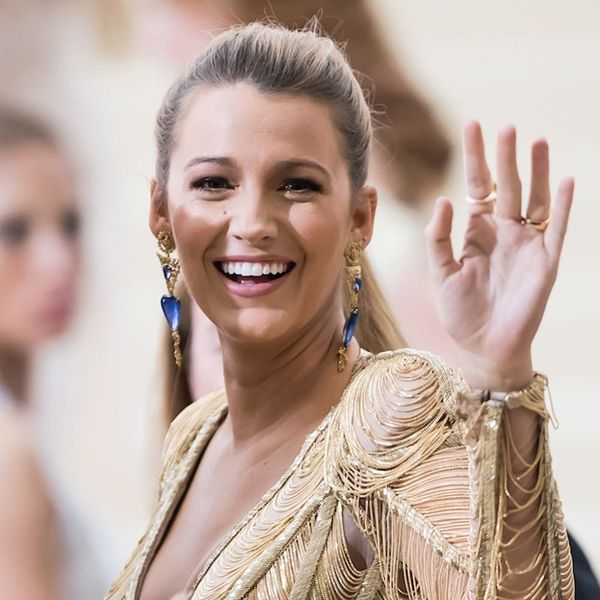 Blake Lively embodied a golden goddess on the 2017 Met Gala red carpet. While we’re pretty sure that copying her plunging Atelier Versace gown with a blue feathered train might be fairly difficult to achieve, her hairstyle isn’t.

And thanks to hairstylist Rod Ortega, who’s dishing on how he created Lively’s mega ponytail, we can get the look at home. “The dress was so beautiful, colorful, and detailed, we wanted a look that complemented it rather than competed with it,” Ortega told Brit + Co. “An edge to a classic pony with a creative approach to texture accomplished just that.”

Ortega says to begin with damp hair and blow] it out with a flat brush before straightening with an iron (he prefers the T3 SinglePass Luxe Flat Iron [$180]).

Next, he took a small section of the hair from the ponytail, wrapped it around the elastic, and secured it with bobby pins. To create that unmistakeable (and oh-so retro) crimp for texture, Ortega used his trusty T3 SinglePass Compact Flat Iron ($89) to bend the hair. For an effect like Lively’s, start at the top of the pony and bend the iron four times in an S-shape pattern; then leave 1.5 inches and move down the hair, and add another four bends until you’ve reached the end. Spray L’Oreal Paris Elnett Satin Hairspray ($11) all over, and you’re good to go!

So, who’s going to recreate this look at home? Tweet us @BritandCo.

Channing Hargrove
Channing Hargrove is a freelance fashion editor and writer in New York City. When she isn’t writing about clothing (or shopping, for research, of course), Channing is writing about life in a tiny studio apartment in a big city — and what she’s wearing — on her blog, Channing in the City.
Blake Lively
Hair
Blake Lively Celebrity Hair Met Gala Ponytail Red Carpet
More From Hair