The 10 Best Looks from the First Day of Cannes 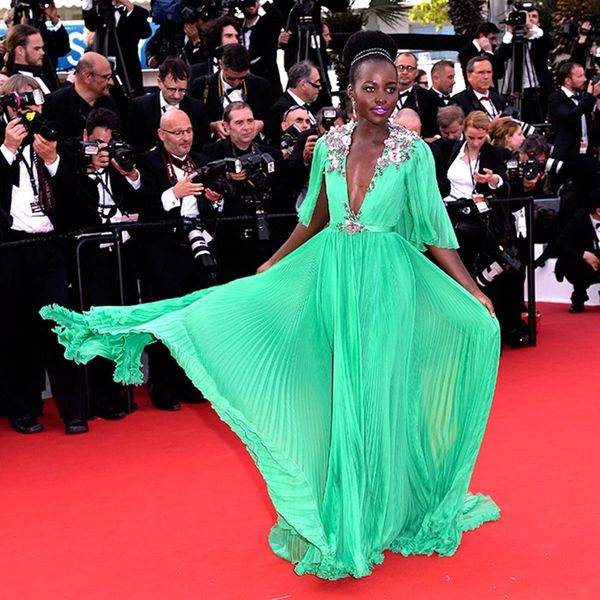 Today marks the official start of the 68th Annual Cannes Film Festival. We’re pretty stoked about the slew of films premiering here over the next week but we’re equally as excited to see what some of the biggest names in the industry wear on the red carpet. While Sundance is more of a casual affair, Cannes is very much the opposite. Expect to see lots of gorgeous ball gowns, decadent jewels and flawless makeup. We’ll be coming at you with red carpet updates all week long, but to get you started, here are some of the most stunning looks from day one of the festivities.

1. Lupita Nyong’o: Lupita is giving us some Oscars flashbacks in this voluminous, emerald Gucci gown. We’re thinking she might just have Marylin Monroe beat for best wind-ready dress. (Photo via Pascal Le Segretain/Getty)

3. Natalie Portman: Oh, Natalie, how we’ve missed you. The starlet hasn’t been spotted on a major red carpet for some time now, but it looks like she decided to make a grand entrance for her directorial debut in this simple and sleek strapless number. (Photo via Pascal Le Segretain/Getty)

5. Naomi Watts: A little bit of feather action never hurt anybody. Naomi went for an ultra-luxe look in this silver Elie Saab number that not only featured a feathered skirt, but also a bejeweled, low-cut top and pockets! We’re into it all. (Photo via Pascal Le Segretain/Getty)

6. Karlie Kloss: Leave it to Ms. Karlie Kloss to bring some old fashioned American glam to France. The model (and budding coding expert) rocked the red carpet in this Versace… skort? Considering the piece is a kind of half skirt/half pant combination, we’re not really sure what to call it. (Photo via Pascal Le Segretain/Getty)

7. Sienna Miller: A little earlier in the day Sienna Miller showed up for a Cannes jury photocall in this gorgeous textured Balenciaga midi dress paired with strappy, ’90s-inspired heels. (Photo via Andreas Rentz/Getty)

8. Fan Bingbing: The Chinese actress and Cannes staple, challenged Hofit Golan for most dramatic dress in this pastel Ralph and Russo number topped with an epic train. (Photo via Pascal Le Segretain/Getty)

10. Frederique Bel: Following in the see-through, barely there trend we spotted all over the Met Gala’s red carpet, French actress, Frederique Bel added a little color to the style in this dazzling shade of blue.

What was your favorite look from day one? Share with us in the comments below.

Cortney Clift
Cortney is the senior writer and special projects editor at Brit + Co. She typically covers topics related to women's issues, politics, and lifestyle. When she's not buried behind her computer you'll find her exploring New York City or planning her next big adventure.
Red Carpet
TV
Red Carpet