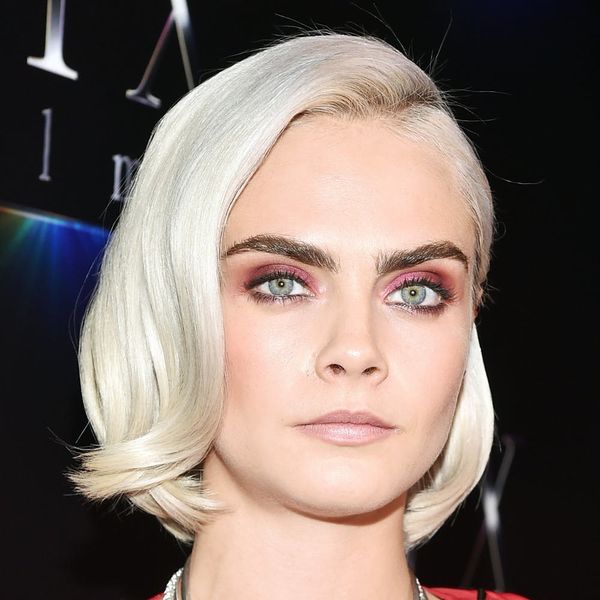 It was just last month that Cara Delevingne debuted an uber-cool shade of platinum silver unlike any we’d seen before, giving us serious #HairGoals in the process. But already, the style chameleon has gone and changed things up, chopping it all off in favor of a shaved pixie that looks more akin to Katy Perry’s recent shorter, blonder look.

Unlike Perry’s makeover which, as she recently explained to Vogue, is an effort not to let things get too stagnant, Delevingne’s transformation is for her next film role in Life in a Year, alongside Jaden Smith. The actress is set to play a dying young woman, whose boyfriend (Smith) aims to help her live an entire life in the last year she has left to live.

it's getting shorter and shorter… but i don't care, i didn't love you just because of your hair. I love you @Caradelevingne 💗 pic.twitter.com/or1s0SEQKQ

The 24-year-old first teased the cut over on her Snapchat, posting a photo of her shorn locks alongside a caption which read, “Oh, no!”

Later, she revealed the full buzz over on Instagram, saying, “I’m coming for you, @lifeinayearmovie.”

I'm coming for you @lifeinayearmovie

It’s a style that’s all the better to… break boards with? The model showed off her martial arts skillz (along with her much-shorter tresses) by slicing one clean in half with nothing more than her bare hands. Impressive, BB!

Thank you so much @martialsmarts.toronto for showing me how to protect myself @puma #doyou

Between Katy Perry and Halsey, who twinned with their uber-short looks at the iHeart Radio Awards, and Kristen Stewart, who also shaved her head for an upcoming role, it looks like this is quickly becoming one of Hollywood’s hottest new looks, intentional or otherwise.

Which begs just one question: Are you brave enough to try it?

What do you think of Cara’s new look? Sound off over @BritandCo.

Nicole Briese
Nicole is the weekend editor for Brit + Co who loves bringing you all the latest buzz. When she's not busy typing away into the wee hours, you can usually find her canoodling with her fur babies, rooting around in a bookstore, or rocking out at a concert of some sort (Guns N' Roses forever!). Check out all her latest musings and past work at nicolebjean.com.
Celebrity Hair
Hair
Celebrity Hair Haircuts