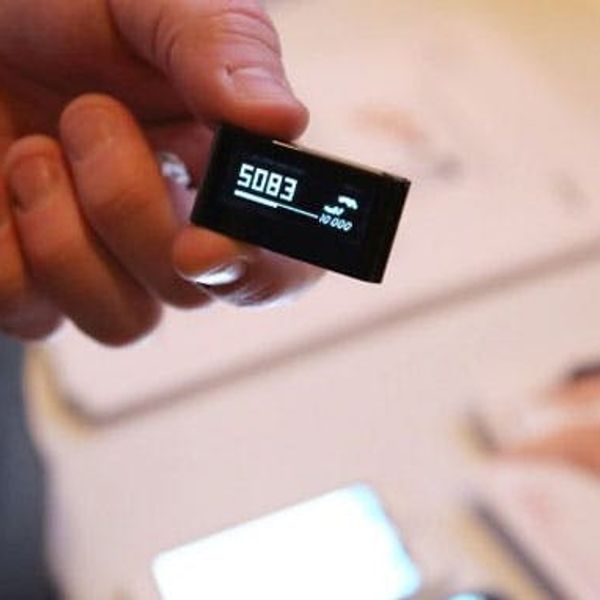 What’s more exciting than a new year? A new Consumer Electronics Show, of course! For those of you who aren’t quite as geeky as us, CES is a technology trade show held each January in Vegas. It’s the place where innovative tech items such as the Xbox, HDTV, and Blu-Ray DVD were first unveiled.

Well this year’s no exception to a whole bucketload of innovation. While there are dozens of awesome gadgets to share with you, here are 15 of the latest and greatest that stood out to us.

1. Lenovo Tabletop PC: And boom goes the dynamite! CES was off to a solid start with the reveal of Lenovo’s 27-inch multi-user multimode, multitouch tabletop PC. With a display that can either lay flat or be angled up like a more traditional monitor, the IdeaCentre Horizon is definitely a next-level tablet. You can even get a stand and turn it into a full on table for more than one person to use. Totally amazing.

2. YotaPhone: Along with fellow nerds everywhere, the first thing we thought when we saw the word YotaPhone? The force, of course. But this phone is actually pretty awesome. At first glance it’s a high-end Android 4.1 Jelly Bean Smartphone. When you take a second look, you can see that it’s got an e-ink display on the back. If you’re reading a long article or book, why drain the power of your color HD display (not to mention strain your eyes) when you can go e-ink instead? It’s like a Kindle and Smartphone in one. Pretty awesome.

Last summer, we swooned over WeMo’s gadget + app pairing that allowed you to control the outlets in your house from your phone as well as WeMo’s smarter baby monitor. Well, they’ve done it again and are bringing smart technology to everyday devices in your kitchen like Crock-Pots, coffee makers, and more. Future kitchen? Coming right up!

4. Tethercell: But what about gadgets that can’t be controlled via an outlet? You know, the battery-powered kind? For those, there is Tethercell, a battery controller that enables you to connect to and control AA-battery-operated devices from your smartphone. Each smart battery is the size of a regular AA battery, but it holds an AAA battery inside as well as a Bluetooth chip. You can turn off your roommate’s dancing hamster if it’s driving you bonkers, set hours for when a device can be used, and more.

5. Evernote-Ready Smart-Fridge: You read that right. Evernote is getting involved with your fridge, all thanks to Samsung. The new T9000 fridge-freezer by Samsung includes an expanded touchscreen and improved app selection, including Evernote integration. Apps include a read-only Twitter client and Epicurious access, and you can easily make grocery lists via Evernote.

6. VivoPlay: This little watch-looking device packs WiFi, GPS, and a GSM connection into one pretty package, specifically geared towards parents who want to track their kids. You can even call your little one via video chat on the watch’s face. It works with an app, of course, and is a great alternative to outfitting kids with a full-on smartphone.

7. gTar: And now for something completely different! A computer-powered guitar! This instrument aims to make it loads easier for amateurs and pros to get more out of their guitar experience. Record songs you write, jam sessions, take lessons right on your guitar, and more. gTars are available for pre-order at $399 a pop, and expect to ship this Spring.

That’s right, another wireless portable speaker! The boomBottle is designed to fit in the bottle holder of your bicycle and purports to be tough as nails. Made of waterproof housing along with a thermoplastic polyurethane construction, this speaker can take even the roughest of mountain treks. The speaker connects to your phone or iPod via Bluetooth, lasts for up to 10 hours of audio, and doubles as a speakerphone with built-in mic. We’re not sure where this leaves your water, or how it compares to other portable speakers, but we’re definitely keeping our eye on the boomBottle.

9. HAPIfork: This is one for the dieters. Created by Hong Kong’s HAPILabs, this fork is designed to help users lose weight by reminding them to eat more slowly. It actually vibrates when you eat too much or too fast via sensors inside the fork. It records the start and end time of the meal and number of forkfuls eaten, and transmits this information to, you guessed it, a matching app. Cool or crazy?

Speaking of an increasingly crowded market, Withings has just announced the Smart Activity Tracker, a device that tracks how many steps taken, how far you’ve gone up and down stairs, how many calories burned through the day, and your sleep patterns. Sound familiar? Just like Fitbit One, Nike+ FuelBand, or Jawbone UP, this tracker is all about recording your activity everyday and works with a matching app. Unlike those ones, it’s a smaller device that fits in your pocket or can attach to your arm with a wrist band. The flexibility for placement definitely makes this an attractive option.

11. Fitbit Flex: Speaking of activity trackers, Fitbit has just announced the Flex, a wireless band much like the Fuelband and UP. It comes in five different colors, features a band of LED lights that signify your activity progress, syncs via Bluetooth 4.0, and even works with… Android!

12. CubeX 3D Printer: You know we love the Cube, a midrange desktop 3D printer by the folks over at 3D Systems. Well now the CubeX is out, billing itself as a higher-end model in direct competition with MakerBot’s Replicator 2. CubeX’s build area is 10.8 x 10.45 x 9.5 inches, meaning you can print much larger objects than before. The CubeX starts at $2,499.

13. Bone Conduction Headphones: We promise, these sound way more intense and skull-crushing than they are. Panasonic’s new line of headphones pump sound directly into your head, but not quite through your ears. Two “speakers” simply sit just outside of your ears and vibrate the sound into your skull. Designed to let listeners hear both music and ambient noise, they are definitely a different take on the headphone.

14. Siri + Chevy: Do you miss the sound of Siri when you’re cruising on the road? Not if you’re driving a 2013 Chevy Spark. As the first Siri-enabled vehicle, the Spark is definitely nerding out in the driving department. The car features a MyLink radio that can be upgraded to Apple’s iPhone 4S / 5 helper, and can be accessed via the Bluetooth-enabled steering wheel. Messages from your phone are read back to you through your car stereo, and you can ask for things like recommendations for local businesses. Instead of pulling up the information in a visual display, Siri simply tells you where to grab the closest cheeseburger. (P.S. Are thumb rings a thing again?)

15. iPotty: And finally, something totally wacky. They say that a good portion of iPad use takes place on the john, so why not get the little ones started early? Definitely the most random iPad accessory we’ve seen in a while.