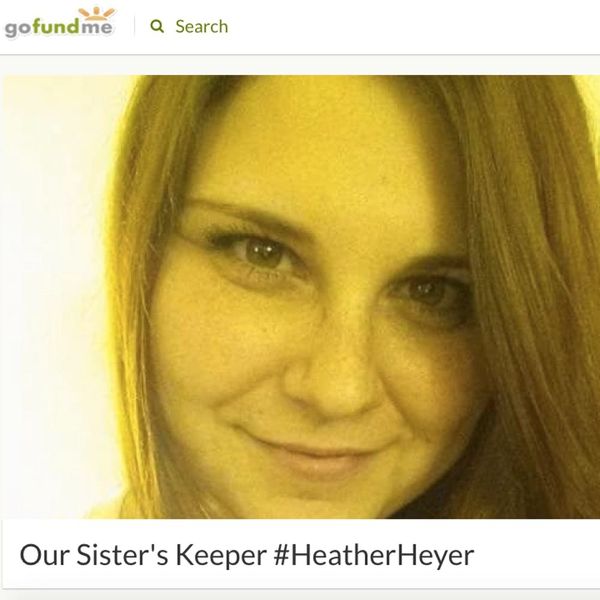 By now, we have all heard about Heather Heyer, the 32-year-old woman who lost her life in Charlottesville, VA protests this weekend. While peacefully protesting against white supremacists who descended on the sleepy college town, a vehicle rammed through the crowd and killed Heyer, injuring 19 others. Now, Heyer’s parents are speaking about their daughter and her remarkable commitment to equality in new interviews with NBC News.

“It was important for her to speak up for people who she felt were not being heard,” mom of Charlottesville victim Heather Heyer said pic.twitter.com/OxYvWg3OoL

Heyer’s mom, Susan Bro, said of her daughter, “Heather, her entire life has been passionate about justice for everyone and fairness and fair treatment. And you’d better be able to explain to her why something was true or not true, why it had to be that way. As a child, that could be maddening, as a parent it could be difficult and challenging. But nevertheless, I encouraged and allowed her to be strong willed. Not that I could change her, even if I wanted.”

WATCH: Heather Heyer's father says he forgives the man who killed his daughter. "She had more courage than I had." pic.twitter.com/S1aVQzfvW8

Heyer’s father, Mark Heyer also spoke of his daughter’s strength and passion. “She tried to stand up for that [equal rights]. And for her, it wasn’t lip service. That was something she wanted to share with everyone,” he said, adding, “My thoughts about all of this stuff is that people need to stop hating and they need to forgive each other, you know. And I include myself in that, in forgiving the guy that did this. He don’t know better. I forgive them, they don’t know what they’re doing.”

“My daughter’s life… she’s… I’m proud of her,” Mark Heyer said, adding through tears, “She had more courage than I had. She had a stubborn backbone, and when she thought she was right, she’d stand there and defy you. But if I understand her, she wanted to do it peacefully, and with a fierceness of heart that comes with her conviction.”

Both of Heyer’s parents expressed hope for positivity in the future, but they aren’t the only parents speaking about the events of this past weekend’s protests. Outed supremacist Pete Tefft was caught on camera yelling Nazi propaganda in Charlottesville. When he was publicly named, his father Pearce Tefft wrote a letter to a local Fargo, ND newspaper, condemning his son’s actions.

“I, along with all of his [Peter Tefft] siblings and his entire family, wish to loudly repudiate my son’s vile, hateful and racist rhetoric and actions,” Tefft wrote in his heartfelt letter. “We do not know specifically where he learned these beliefs. He did not learn them at home.”

How are you helping the people of Charlotte? Tell us @BritandCo!