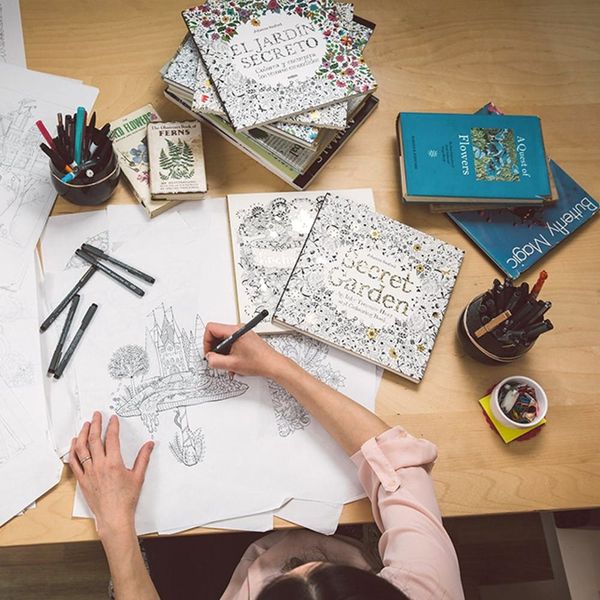 Back in your nursery school days, was there anything better than coloring? Not that you had much to be stressed out about back then, but studies show that coloring is actually quite relaxing for those of us who have a little more stress in our lives than toddlers. And coloring for grown-ups is taking Europe by storm. British illustrator Johanna Basford’s Secret Garden became an international best seller when it was released in 2013. French women are leading the crayon-wielding set, so much so that the book has been outselling the country’s best selling cookbooks. And for a food-obsessed country, that’s saying something.

Johanna’s drawings are painstakingly detailed whimsical scenes filled with animals, flora and fauna. She first sketches the scene in pencil before going over the drawing with ink. The resulting images are amazingly elaborate, intricate and absolutely breathtaking. All you have to do is add color.

If coloring sounds like something you need in your own life, you’ll be glad to know that Johanna’s second book was just released last month: Enchanted Forest: An Inky Quest & Coloring Book. The book has the same intricate drawings as Secret Garden, but this time, there is a little quest. Hidden throughout the book are eight symbols that readers must use to solve a final puzzle.

So, who’s ready to relax and go on an adventure? Grab your crayons and let’s go!

Would your adult self pick up coloring as a hobby to destress? Let us know in the comments below!

Amy Azzarito
Amy Azzarito has written about design trends and the history of decorative arts for a variety of publications, including Food 52, Refinery29, Design*Sponge and Apartment Therapy. She is presently at work on a book titled "Domestic Bliss: The History of Luxury at Home in 100 Objects" to be published by National Geographic Press in Spring 2017. When not researching design history, she practices yoga, rides her bike or skateboard, works on improving her photography chops and tends to the whims of her two cats, Loki and Freya, who allow her to live in their Sacramento apartment.
Art
Home News
Art Books Design
More From Home News