Drew Barrymore, Timothy Olyphant, and Netflix Helped a Fan Propose to His Girlfriend 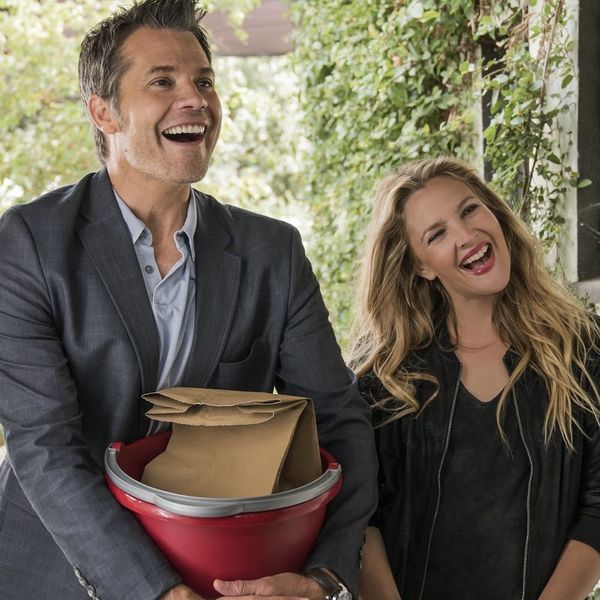 There are a lot of ways to propose. You can do it with personalized gelato, a big public gesture, or even three years’ worth of letters. Or, if you’re lucky, you can enlist Netflix and Santa Clarita Diet stars Drew Barrymore and Timothy Olyphant to help you out. That’s what a man named Conor did when he decided to pop the question to his girlfriend, Kamela — and the whole thing was caught on camera.

Conor and Kamela watched Netflix on their first date six years ago, so he wanted to find some way to incorporate it into his proposal. He worked with the streaming company to trick Kamela into thinking they were going to be a part of some new Netflix reality show that involved them watching her favorite show, Santa Clarita Diet.

But soon after her bae popped on the quirky zombie series, it became clear that something was up. After Barrymore and Olyphant (in character as Sheila and Joel Hammond) went over a few tips for a healthy marriage — including unconditional love and “never let[ting] your wife go to bed hungry” (not angry, “common mistake”) — Conor himself stepped onto the screen, wedging himself between the two celebs.

As Kamela tried to figure out what was going on, the IRL Conor pulled out a ring on the couch beside her. “I have one [question], but it’s not for you guys,” the on-screen Conor began. “This one’s for my girlfriend Kamela. … First of all, Kamela, surprise! Second of all, I have a question for you. I think I’ll actually just let the real me go ahead and ask that one.”

At that, Conor pulled Kamela (who was crying by this point, natch) to her feet. “This is not a show, babe, this is not real,” he said, referring to the set-up. “This is all for you. Babe, it’s been awesome being your boyfriend, but if you’re cool with it, I’d rather be your husband.”

Kamela’s happy tears pretty much guarantee that this proposal is going to end well, but watch the video to see how she responded!

Were you totally charmed by this Netflix proposal? Let us know @BritandCo!

Desiree O
Desirée O is a ‘Professional Bohemian’ who loves anything and everything related to the arts, entertainment, and pop culture. She ADORES being a ‘Newsy’ for Brit + Co, covering all of the latest tidbits of awesomeness that you want to read about. When she’s not writing, she’s either making messy art, going on long adventurous walks with her camera, or poking around over at bohemianizm (http://www.bohemianizm.com/). You can find out about Desirée O and her work at http://DesireeO.com/ or follow her on Twitter @DesireeO.
Engagement
Pop Culture
Engagement Netflix
More From Pop Culture