This Proposal Involves Gelato, and We Love It 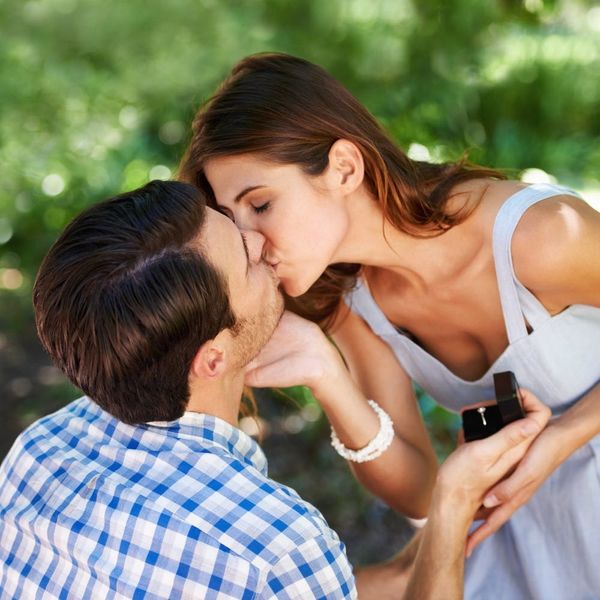 Else Schmit and her boyfriend of almost two years, Luke Munsterteiger, are known for their shared love of not only each other, but also for Talenti Italian gelato. Often splitting pints together, when Luke was ready to propose, Else’s mother and sister suggested somehow bringing their beloved gelato into the plan. And Luke managed to do just that.

He contacted Talenti, who responded by creating a custom package (including the duo’s fave set of emoji) and a unique flavor for the pair called “Else, Will You Marry Me?” (specifically, it was fudge brownie).

This ice cream company created a custom wedding proposal label and it will MELT YOU 😍😍😍 https://t.co/CednUGaEbN pic.twitter.com/amMeMdxl3Q

Once he had the goods in hand, Luke told Elite Daily, “I snuck it into the store under my coat and then placed it toward the back, hoping no one would take it by mistake.”

When Else came in, though, she was in the mood for a Pumpkin Spice pint, but Luke had another idea. She explains, “He opened the freezer door and pointed to one but I couldn’t see the label, so I was totally oblivious. As I picked it up and read it I couldn’t believe it — there was no way! Luke had taken a step back so when I turned around he was already on one knee. I was super cheesed, of course.”

But not cheesed enough to say no, thank goodness. When Else’s mom and sister popped into the aisle, Luke presented his new fiancée with a family heirloom ring from the 1920s that the soon-to-be-bride’s mother gave to Luke to present to his love.

Would you (or someone you know) love an ice cream proposal? Tweet us @BritandCo!

Desiree O
Desirée O is a ‘Professional Bohemian’ who loves anything and everything related to the arts, entertainment, and pop culture. She ADORES being a ‘Newsy’ for Brit + Co, covering all of the latest tidbits of awesomeness that you want to read about. When she’s not writing, she’s either making messy art, going on long adventurous walks with her camera, or poking around over at bohemianizm (http://www.bohemianizm.com/). You can find out about Desirée O and her work at http://DesireeO.com/ or follow her on Twitter @DesireeO.
Engagement
Most Recent
Engagement Ice Cream