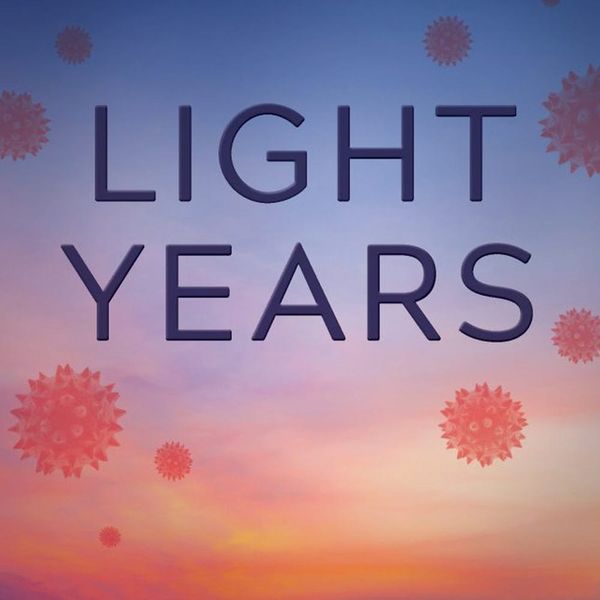 When you’re crushing on someone hard, starting a new job, or watching Serena Williams’ video about her daughter’s birth, it can feel like your brain is in FEELINGS OVERLOAD. In Emily Ziff Griffin’s newest novel, Light Years, all of those feelings come with some major synesthesia-like side effects for Luisa… which can get annoying if you’re trying to save the world from a deadly virus. If you’ve been plagued by a boring book rut, the thrilling and wonderfully inventive Light Years will absolutely cure it. Today, we’re catching up with the lady behind the book and chatting creativity, lady heroes, and Twitter accounts that make her LOL. Scroll on to learn more from the brilliant Emily Ziff Griffin!

Brit + Co: Describe your book in six words or less:

EZG: In my home office in the last half an hour before I am supposed to pick my kids up at school. And so I’m always late. (Photo via Sara Murphy)

Red Sky 1 32x32 "Many mythologies exist about art and science that enable and also hinder the ability of viewers to understand what is really going on. With art, it’s that art is about expression, emotion, etc, and that the only response the viewer can have is to emote, connect or reject, all with your hands safely behind your back."

EZG: I cold called a random artist named Daniel Kohn who was featured in an article about using artistic practice to interpret data in new ways. We ended up talking for like three hours and he became an integral part of my conception of Light Years (and a favorite human).

EZG: One of my BFFs is the president of a major film studio division and she is absolutely the classiest, savviest woman I know. I often ask myself ‘What would Hannah do?’ and then I do that. Also, my five-year-old daughter who lives so fully in her heart and body. Her confidence and authenticity blow my mind and inspire me every single day.

This is how it ought to be, despite what your gender studies professor says pic.twitter.com/h31okP8w0U

EZG: Def obsessed with R. Eric Thomas (@oureric) and his column for Elle and just everything he writes. I am also deep to the GIFs. I just produced a small movie and one of the crew members began communicating with me in 80 percent GIFs / 20 percent words, and I have been going crazy with what a revolutionary mode of communication GIFs are. The idea of a visual distillation of the essence of your intended sentiment, chosen from an abundant array of pop-culture, gestural references is like… I can’t really even talk about it yet, but I’m nerding out in my head.

EZG: I am loving Samantha Hunt’s short story collection The Dark Dark, though I learned about it from her glowing review in the New York Times so she may not be struggling for readers!

EZG: Meghan O’Rourke’s new book of poems Sun in Days because she is one of the greatest writers on the planet. And we are doing an event together in NYC on 9/27!

EZG: Create from your heart, always. It’s got to be personal, always. Trust right timing which really means: Be patient but don’t give up. Ask a lot of people to look at your work. A lot a lot.

Got an author you’d love to see interviewed? Tweet us @BritandCo and let us know!

Angela Velez
Angela is an MFA Fiction candidate at the University of Pittsburgh. You can find her reading obsessively, wandering bookstores and watching melodramatic television.
Books
Creativity
Books
More From Creativity