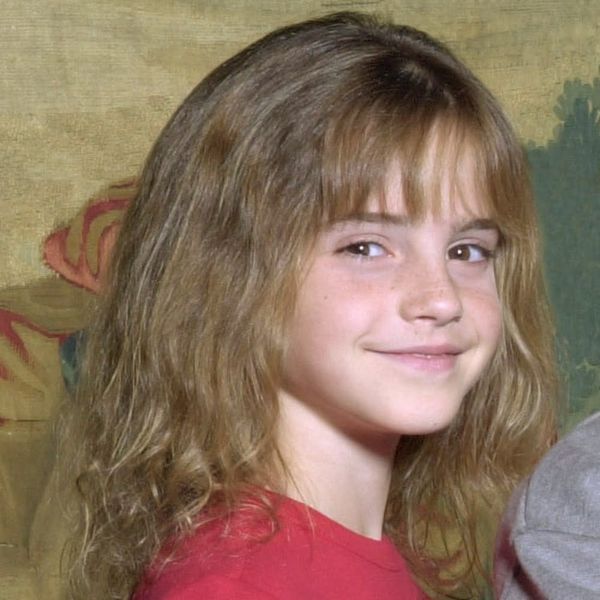 When the cast of Harry Potter was first introduced way back in the day, we all immediately fell in love with the young actress who was cast to play the wonderfully brash, bold, super-smarty Hermione Grainger. Emma Watson had just the right mix of muggle moxie and magical matter-of-factness that immediately made her someone that all little girls could look up to. As those little girls grew up, so did Hermione, and along with her, Emma. Today, one of Hollywood’s most talented and respected stars, Emma Watson has evolved her style from adorable English girl to red carpet fire. On this, the day of her birth and surely celebrations for the star, let’s zone in and take a look at Emma’s awesome hairstyles that she’s rocked throughout the years!

On August 21, 2000 (yes, 16 years ago now!) the cast of Harry Potter was introduced to the world. Fans got their first glimpse of Daniel Radcliffe in the lead role, Rupert Grint as Ron and Emma Watson, the perfect choice for Hermione. Her loose bangs and tousled, wavy hair were perfect for the normal yet totally extraordinary character.

Just four years later in 2004, Emma appeared on MTV’s Total Request Live already showing a style that was quickly maturing. With amped up curls that were pulled back from her face, she also sported a jacket that was as bold as Hermione.

Then, BAM, Emma grew up. In 2007, her bold style matured in a sleek and stylish look that wowed the red carpet.

Shocking and delighting us once again (or, like, as always), Emma showed up in 2010 with a super-short pixie cut that only amplified her lovely face and further proved that this lady has no fear when it comes to being fiercely fashionable.

Emma kept the short look for well over a year, showing off its classier side…

…as well as its beautifully bold side.

By 2012, the longer locks were making a comeback for the actress whose star was continuing to rise fast and furiously.

When 2014 rolled around, it had been 14 years since the world had first set eyes on Emma. Now, an A-list star, she was truly one of the most lovely ladies in the industry.

Currently, Emma has gone back to a shorter look in a lighter shade, which suits her just as well as every other style she’s tried throughout the years.

Happy birthday, Emma! We love you, your acting and your hair!

Is Emma Watson (still) one of your favorite actresses? Tweet us @BritandCo!

Desiree O
Desirée O is a ‘Professional Bohemian’ who loves anything and everything related to the arts, entertainment, and pop culture. She ADORES being a ‘Newsy’ for Brit + Co, covering all of the latest tidbits of awesomeness that you want to read about. When she’s not writing, she’s either making messy art, going on long adventurous walks with her camera, or poking around over at bohemianizm (http://www.bohemianizm.com/). You can find out about Desirée O and her work at http://DesireeO.com/ or follow her on Twitter @DesireeO.
Celebrity Hair
Style News
Celebrity Hair