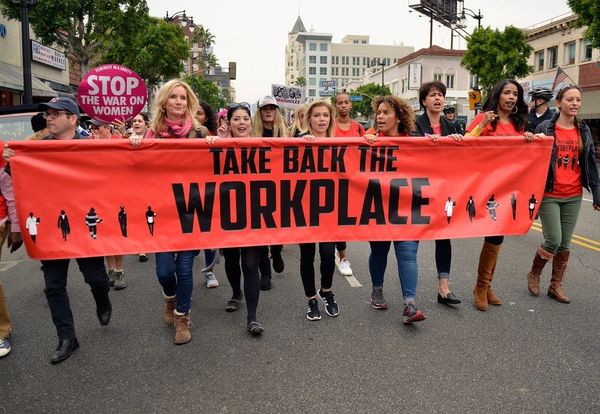 Last summer, several members of Congress teamed up on a bipartisan, bicameral bill to address the issue of workplace sexual harassment. This week, Representatives Lois Frankel, Jerrold Nadler, John Katko, Lisa Blunt Rochester, Brian Fitzpatrick, and Lauren Underwood reintroduced that bill — aptly titled the EMPOWER (Ending the Monopoly of Power Over Workplace harassment through Education and Reporting) Act — with 49 other co-sponsors across both political parties.

Initially tabled by Senators Kamala Harris and Lisa Murkowski in June 2018, the EMPOWER Act aims to address workplace harassment and the culture of fear and silence that often accompanies it. The legislation includes measures to increase workplace transparency and employer accountability, as well as proposals to reduce barriers that survivors may face in trying to speak out and seek justice.

Specifically, the EMPOWER Act aims to “prohibit non-disparagement and non-disclosure clauses that cover workplace harassment as a condition of employment, promotion, compensation, benefits, or change in employment status or contractual relationship”; establish a tip line at the Equal Employment Opportunity Commission that will allow the organization to better manage complaints; require public companies to disclose how many complaints, payouts, and settlements are reached in workplace harassment cases; prohibit companies from receiving tax breaks for retaining a lawyer to fight harassment suits; and create and disseminate workplace harassment training programs.

“Time is up for workplace harassment that robs women and men of a safe work environment, causing distress and harming their financial ability to take care of their families,” Frankel, who is also the chair of the Democratic Women’s Working Group, said in a statement on March 5. “The EMPOWER Act will help end this abuse of power and create more dignified workplaces.”

The EMPOWER Act is endorsed by nearly 30 national organizations, including the ACLU, the National Women’s Law Center, the Center for American Progress, and the YWCA.

“We owe meaningful change in our laws not just to courageous women who have come forward in the #MeToo conversation, but also those who continue to be silenced,” Harris tweeted when the bill was first introduced last year. “I’m introducing the bipartisan EMPOWER Act to strengthen our laws so workplace harassment will no longer go unpunished.”

Kat Armstrong
Kat has been a writer, social media maven and mom for longer than she's willing to admit. She's also spent time in front of and behind the camera, interviewing celebs, politicians and acting as a producer for fashion and artistic photography shoots. When she isn't writing for various orgs and publications, she's hanging with her kids, husband and French Bulldog, Peter, in Toronto, Canada.
Politics
Empowerment
Politics
More From Empowerment