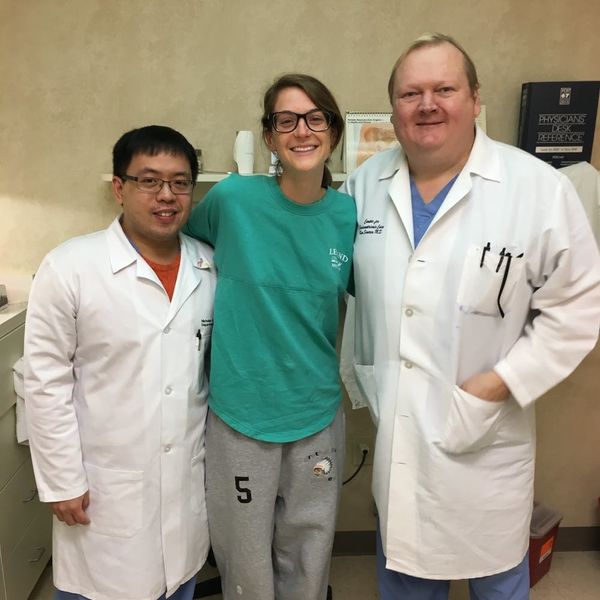 Over 170 million women worldwide have endometriosis — a chronic disease where the lining of the uterus grows on surrounding organs causing infertility and debilitating pain. On average, it takes about seven years from symptom onset to receive a diagnosis.

A few months after my 21st birthday, I was hunched over on the bathroom floor of my apartment in agonizing pain, unable to move. Many doctors say that having cramps on your period is normal, but this was like nothing I had ever experienced in my seven years of receiving Mother Nature’s gift. And this was far from a gift.

The next three days were spent lying in bed curled up in a ball, feeling like a little demon was inside my pelvis pulling on my organs and stabbing me repeatedly. My boyfriend and roommate had considered taking me to the hospital, but after talking with my mother who has experienced menstrual cramping like this her entire life, we figured it was just one bad case of cramps that would blow over. Little did my mother know the pain she suffered from all of her life was caused by endometriosis, a merciless disease that can be passed genetically.

My next period resulted in the same excruciating pain, and the one after that — and the one after that. So like anyone would do, I went to my gynecologist, who put me on low dose birth control to stop my period. Her diagnosis? I was just an unlucky girl who happens to have bad menstrual cramps.

The birth control halted my symptoms for about six months (just enough time to get me through my last semester of college), until I developed painful bladder symptoms: burning, retention, and a constant feeling of fullness. Doctors ran multiple tests ruling out urinary tract infection and interstitial cystitis (painful bladder syndrome). Over the coming years, the pain spread throughout the rest of my pelvis and became daily. My morning jogs became too painful, so I started walking. But then walking a few yards was too much to bear, so I spent my days lying around. My work performance suffered and eventually, I quit my job. My once active and happy life was slowly slipping through my fingers.

I saw countless gynecologists and urologists, some of which laughed at me and told me the pain was all in my head. I underwent every imaging test you can think of and still everything came back normal. Acupuncture treatments became weekly for me, and I started eating a vegan diet, but it hardly made a difference.

This was an extremely challenging time for not only me, but also my family, my boyfriend, and friends. Without an official diagnosis, I started to feel that everyone was questioning the reality of my pain. I had never felt loneliness so dark and deep; I had considered the possibility of ending my own life. My friends were slowly losing touch and my meaningless days spent in bed were starting to blur together. The arguments with my boyfriend started piling up. As far as I was concerned, my existence served no purpose other than to burden others.

Luckily, the light within me hadn’t completely burned out. I refused to give up and took matters into my own hands by researching my symptoms, until one day I finally came across a disease called endometriosis. And from there I read more and more, discovering that it starts off as period pain, which can lead to chronic pain. I learned that it could also grow on the bladder and bowels, causing painful defecation. I knew without a doubt this was what plagued me.

As I think back now, the timing of it sounds crazy. But about a week after diagnosing myself I had an ultrasound with my gynecologist and for the first time a five-centimeter chocolate cyst (endometrioma) was revealed, presenting the possibility of endometriosis. Not all women with endometriosis develop this type of cyst, but having one is a good indicator that endometriosis is present. Unfortunately, by the time a patient develops one of these cysts, they are typically in a late stage of the disease. Still, an exploratory laparoscopy is needed to get a definitive diagnosis.

As someone who is skeptical of self-diagnosis on the internet, I was shocked that my research had been so accurate. I felt relieved that I finally had an answer for my pain, but it was disturbing that I was able to diagnose my symptoms through a few days of hardcore Googling; yet, it took medical professionals over three years. Even worse, I was told that there was no cure. The disappointment in my gynecologist’s voice and his lack of confidence in treatment options hit me like a ton of bricks. I finally had a diagnosis, but did it even matter?

Within the next month, I had my first laparoscopic surgery, where my surgeon confirmed Stage 3 endometriosis. It spread to every organ in my pelvis, including the pelvic walls. The surgeon said he removed it as best he could and put me on hormones in an attempt to suppress its growth.

But like most women with endometriosis, my symptoms returned — just three months later. Since then I have connected with other sufferers on social media who educated me about the gold standard treatment, excision surgery, which I underwent in November of 2016 at the Center of Endometriosis Care in Atlanta, GA. By then, only six months since my first surgery, my endometriosis had reached Stage 4, spreading to my appendix and diaphragm. My pelvic cavity was covered with adhesions and scar tissue, binding my ovaries to my bowel.

Although I am on the road to recovery, it has been difficult dealing with the after effects of the disease: pelvic floor dysfunction, interstitial cystitis likely caused by excessive endometriosis on the bladder, highly sensitive pain receptors from years of curling up in agony, and anxiety from the taunting truth that this disease may return.

My mother recently told her gynecologist of 15 years about my diagnosis and asked about the possibility of her own pain being related to endometriosis. Her doctor responded with, “Oh, you certainly have endometriosis. I always knew that was probably it.” When my mother asked why she was never given this information, the doctor said, ”There is nothing you can do.”

My hope is that more women become educated about endometriosis and the fact that periods spent bedridden are not normal. The earlier the disease is diagnosed, the better chance a woman has of getting effective treatment. Common symptoms of the disease include: killer menstrual cramps, impaired bladder/bowel function, pelvic pain, and painful sex. To anyone who has these symptoms, I encourage you to ask your doctor about endometriosis.

Have you or anyone you know been diagnosed with endometriosis? Let us know @BritandCo.

Brooke Nemethy
Brooke Nemethy is a blogger based in Orlando, FL. When she’s not spooning her dogs, you can find her picking flowers in her garden or writing for her website thefrecklyfawn.com. Brooke can be reached at brookenem@gmail.com.
Healthy Living
Health
Healthy Living
More From Health